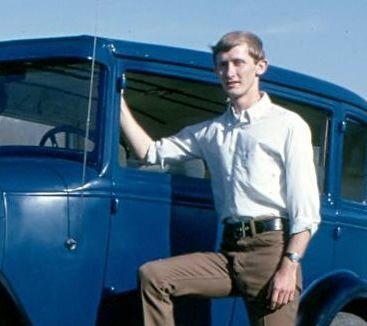 Please share a memory of Frederick to include in a keepsake book for family and friends.
View Tribute Book

Frederick E. Vanderhoof passed peacefully on July 25th, 2022, at Morristown Medical Center after a brief illness. He spent 74 memory-filled years with his friends and family who will remember him fondly.

Frederick was born on September 7th, 1947 to Farnham and Florence Vanderhoof in Dover, NJ, before growing up in Denville. As a Denville native, Frederick was known by many as a devoted husband, caring father, and trusted friend. He just recently celebrated his 50th wedding anniversary with his loving wife, Janice, where he showcased his love for her by creating image boards that documented the countless adventures that they took on together throughout their relationship. His commitment to his family was clear and will always be remembered.

In addition to being committed to his family, Frederick was also a dedicated student of the world. Over the course of his life he earned multiple college degrees, including a Bachelor’s degree in History and Geography, a Master’s degree in Guidance Counseling, and a Certificate in School Business Administration. He attended many schools in his pursuit of education, ranging from Kean University right here in New Jersey, to Northeast Missouri State University and The University of Missouri. His search for education brought him more than he bargained for, as he also met his future wife, Janice, in Missouri as well.  He worked as Board Secretary of the school districts of Netcong, Denville, and then for over 20 years at the town of Dover before retiring in 2010.

Though Frederick was an avid student inside a classroom, his curious and adventurous nature did not let him stop there. Frederick had a passion for traveling; spending his time visiting each state in the nation as well as nearly every province in Canada. Visiting New Zealand, England, Scotland, and Wales was another highlight for him.   He truly could leave no stone unturned and made sure to document every moment of his journey in photos. His photography has given his family the amazing gift of seeing the world through his eyes as they are able to follow him along his journeys and remember them forever.  He was past president and photographer for the Model A  Ford Club of NJ, and was a leader for the Christian Service Brigade at Hope Baptist Church in Flanders.

He was predeceased by his parents Farnham E. and Florence L. (Coates) Vanderhoof as well as his brother Farnham William Vanderhoof.

Visitation will be held on Friday July 29, 2022, from 6:00PM to 8:00PM at Norman Dean Home for Services 16 Righter Avenue, Denville, NJ 07834 www.normandean.com.   A funeral service will be held on Saturday July 30, at 10:00AM at the funeral home followed by interment services at Rockaway Valley Cemetery in Boonton Township, NJ.

Donations can be made in his memory to: Samaritan’s Purse: Operation Christmas Child by way of inmemof.org.

Share Your Memory of
Frederick
Upload Your Memory View All Memories
Be the first to upload a memory!
Share A Memory