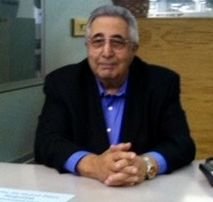 Robert J. Cuozzo passed away at his home in Mt. Arlington, NJ on April

Born and raised in Orange, Bob lived in Caldwell and went to high

school in Glen Ridge.  He lived most of his life and raised his family

in Boonton Township. In 2008 he moved to Mt. Arlington and also spent

Vero Beach.  Bob made many long-lasting friendships wherever he lived

Bob earned his PhD from New York University and completed his

undergraduate studies at Seton Hall University.  He began his career

worked at Ciba-Geigy before launching his own successful company

Chemisphere International.  He retired in 2010.

Pendleton and at Yokosuka, Japan.  He was a Captain at the time of his

Bob was a family man and was devoted to his wife, children and

grandchildren.  In his spare time, he loved to play golf at Rockaway

Bob is survived by his beloved wife of 56 years, Ann Marie (Duddy)

Cuozzo of Mt. Arlington, NJ and by his loving children Robert and his

Edward Fischer of Hoboken, NJ; John and his wife Paulina Cuozzo of

Franklin, NJ; and Kevin and his wife Rebecca Cuozzo of Powell, OH. He

is also survived by his cherished grandchildren Corinne, Ryan, Evan,

Cuozzo-family cousins and their extended families.

Bob was predeceased by his first wife Constance (Johnson) Cuozzo, his

Private family services were held under the direction of Norman Dean

A celebration of Bob’s life will be held at a later date.

Cuozfischj@gmail.com in your donor information.