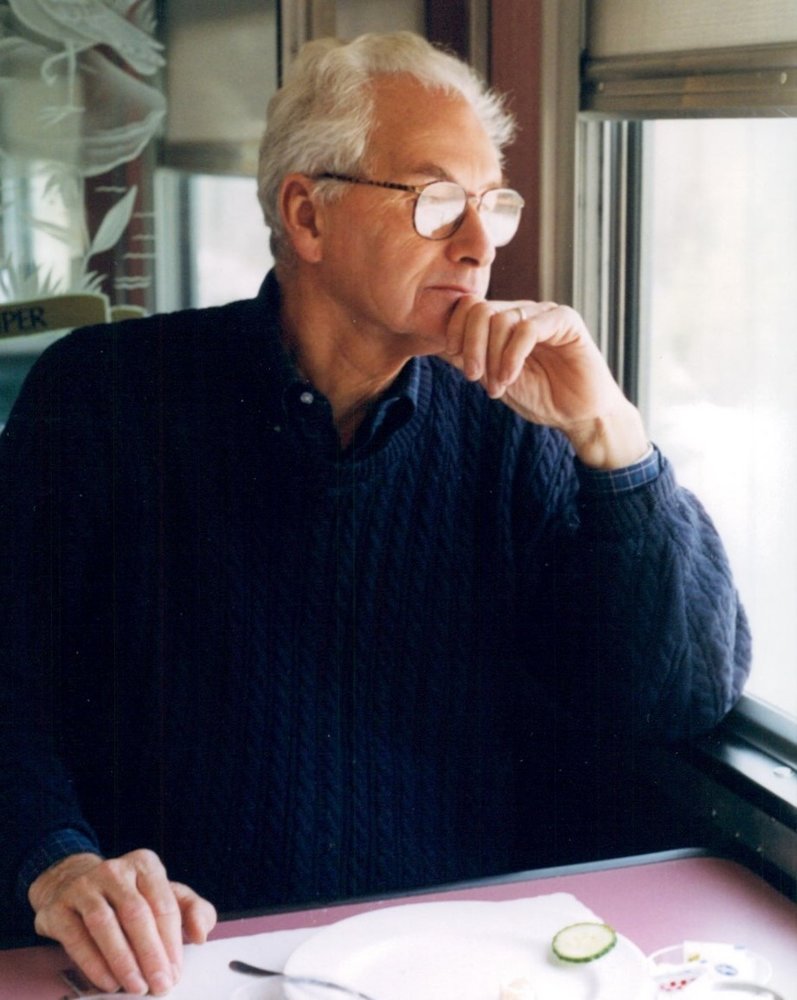 A good and full life. Accomplished in so many ways. Richard was a loving son, brother, husband, father, grandfather, uncle and friend; an Eagle Scout, scholar, professor, coach and mentor; an outdoorsman, traveler, sailor, runner, amateur historian, and community volunteer. He was a storyteller to the end.

Richard was predeceased by Joyce, his wife of over 50 years, his beloved daughter Nancy, and his dear sister Marilyn (Jay). He is survived by his sons David (Anne) and Bob, his granddaughters Nora (Mike) and Audrey (Will) and many friends and extended family.

Richard grew up in Detroit, Michigan. He learned to love cars and cheered for the Tigers. He attended Kalamazoo College and Purdue University where he earned his PhD in Industrial Psychology in 1951. As Dr. Draper, he accepted a position at Bell Telephone Laboratories, only the second psychologist hired by that organization. After ten exciting years at Bell Labs, Richard moved to New York Telephone where, as Personnel Research Supervisor, he applied his academic and research interests in the corporate world. He returned to academics in 1967 as an Associate Professor of Psychology at Purdue University Calumet Campus in Hammond, Indiana. He finished his career as a professor for 27 years in the Psychology Department at Montclair State University in Montclair, New Jersey.

Although he remained proud of his midwestern roots, Richard lived in Denville for over 60 years. He raised his family in Lake Arrowhead starting in one of the original Arthur Crane log cabins that he later expanded based on his own architectural drawings. Lake Arrowhead played a huge role in Draper family life - swim team, softball, 4th of July and Labor Day celebrations, the Garwood Gang.

Richard was an adventurer. As a Boy Scout in Detroit, his troop’s trip to the wilds of northern Ontario was covered by the Detroit Press. At 13, he and a friend embarked on a month-long, 500-mile bike trip around Michigan on single speed bicycles with balloon tires. He packed up the family in the 1959 and then 1964 station wagons, homemade cartop carrier loaded with camping gear, for many memorable trips - California, Florida, Montauk Point, the Canadian Rockies, Glacier National Park, Mount Rushmore, the Badlands, the Grand Canyon. With Joyce, he continued to explore – Alaska, northern Manitoba, southern and western Texas, Nova Scotia, Newfoundland, Grand Manan Island, Hawaii, England, Ireland, Scotland, the Alps. And they enjoyed regular off-season trips to the Outer Banks for the bird migrations and to help replant trees following hurricane damage. After he lost Joyce, he continued to travel, culminating in a three-week solo trip to Alaska in his mid-80s.

For many years, Richard coached Little League teams in Denville. He championed the inclusion of girls and loved being part of the development of each player and building cohesive teams. Always the teacher.

In recent years, Richard continued his lifelong search for knowledge and understanding, reading the New York Times daily, including doing the crossword puzzle – always in red ink - and keeping up with the current literature on his favorite topics – psychology, behavioral economics, the stock market and American history. He was a devoted member of the Canal Society of New Jersey and, as Captain Dick, took visitors to Waterloo Village on a makeshift canal boat to learn about the history of the Morris Canal – work for which he was named New Jersey Volunteer of the Year.

Flowers are an appropriate tribute. Alternatively, Richard and Joyce devoted many happy volunteer hours to the Canal Society of New Jersey and The Nature Conservancy. Please consider supporting these organizations.