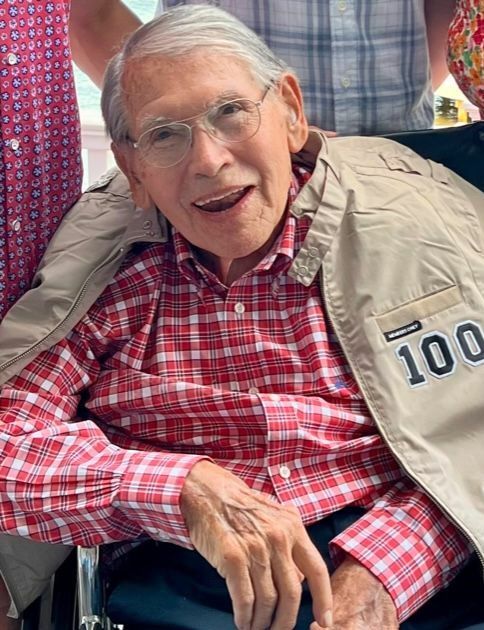 Please share a memory of Gerald to include in a keepsake book for family and friends.
View Tribute Book

Long before recent college grads flocked to Hoboken, New Jersey, Gerard Quirolo was born there on August 23, 1922. As befitting the town’s reputation, Gerry’s father, Joseph, owned a saloon in Hoboken. As a young boy, Gerry moved with his family (father, mother - Florence, and older brother - Frank) to the “country,” i.e., Bogota, New Jersey.

At Bogota High School, Gerry played football, baseball and golf. There he met Marion Schussler and they became high school sweethearts, graduating in 1940. World War II intervened and changed the plans of so many of the Greatest Generation.

Gerry entered the United State Navy as a seaman and served at Pearl Harbor for two years. He was discharged on December 28, 1945 and returned to New Jersey.

Gerry and Marion planned a wedding, with all the trimmings, in a month’s time, marrying on January 27, 1946. They remained married for 68 years, until Marion’s death in 2014.

Gerry attended Rutgers University at night. He graduated in 1955 with a Bachelor of Science degree in Engineering and shortly after acquired a Master’s degree in accounting. He was a systems analyst for many companies over the course of his career, retiring from Witco Chemical Company.

Gerry and Marion, along with other Bogota High School couples, settled in Paramus, before the malls were present. Their two daughters, Gail and Nancy, were born there. Gerry and Marion were actively involved in the Paramus Congregational church where they formed many life-long friendships.

Gerry had many interests and hobbies such as watching his favorite teams, switching his allegiance from the NY Giants and the Yankees, to the Washington Nationals and the Wizards. He enjoyed golf, tennis, skiing and poker with the guys. He and Marion were fond of travel and visited Europe, Hawaii, Alaska, Canada and took many cruises with family and friends. He particularly loved being out in the sun as witnessed by his tan. Sitting on the beach at Green Pond, the Jersey shore or Bradenton, Florida was a favorite pastime.

In 1990, Gerry and Marion retired to Green Pond and enjoyed summers there and winters in Bradenton, Florida. Gerry served on the Green Pond Board of Directors and the Green Pond Environmental Foundation. In 2012, Gerry and Marion moved to Ashby Ponds in Ashburn, Virginia. Gerry moved to the Fredericksburg, Virginia area in 2021 to be closer to his daughter, Nancy. When he died on September 13, 2022 he was living at Trinity Senior Village in Locust Grove where he received loving care from the staff there.

In addition to his two daughters, Gail Boertzel (married to Ken) of Green Pond, New Jersey and Nancy Lentine (married to Joe) of Lake of the Woods, Virginia, Gerry had three grandchildren: Michael Lentine (married to Mary) of Leesburg, Virginia; Todd Boertzel (married to Karla) of Chatham, New Jersey; and Allyson Boertzel (engaged to Anthony Roa) of Boston, Massachusetts. Gerry loved seeing and spending time with his five great-grandchildren (Peyton, Henry and Callie in Virginia and Bennett and Grayson in New Jersey). The family had a wonderful celebration of Gerry’s 100th birthday in Virginia in August.

Family and friends are invited to A Celebration of Gerry’s Life on Friday, September 30, 2022 at 10:00 am at the Norman Dean Home for Services, 16 Righter Avenue, Denville, New Jersey.