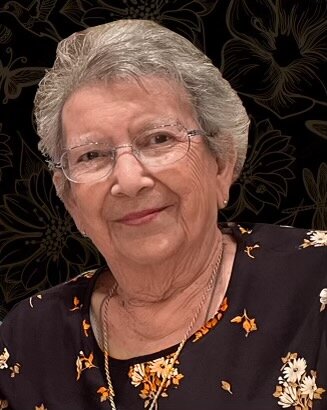 Please share a memory of Ann to include in a keepsake book for family and friends.
View Tribute Book

Ann Mary DeVenezia died on January 19, 2022, at Saint Clare’s Hospital in Denville after a short illness.

Born in 1934, she was the youngest of five children of greenhouse foreman Anthony Lupardi and his wife Mary (Zaccagnio). She had fond memories of her early years in Florham Park and the friendships she formed at Ridgedale Avenue School. After moving to Closter in 1947, Ann helped in her father’s rose-growing business, excelled in her studies and learned to play the clarinet proficiently. She attended the College of Saint Elizabeth, graduating in 1956, and became an English teacher.

She met the love of her life, Richard DeVenezia, when they were paired as bridesmaid and usher in a wedding party. Photos show a couple meant to be. They married two years later in 1959 and started raising their family of six children in Parsippany before moving to Mountain Lakes in 1969. She stayed home during her children’s elementary school years, then returned to teaching and helped put all six through college. Richard and Ann traveled the world and experienced many destinations together, including Italy, Spain, Greece, England, France, Russia and China.

Ann was a woman of many talents. She was a teacher held in high regard by her students and colleagues at Parsippany High School.  She earned her Master of Letters from Drew University while teaching and completed her Doctor of Letters after retirement. She was a reporter, an artist, a musician, and a poet. Later in life, she made new friends playing clarinet in New Horizons Band and lent her talents to Women Who Write. She authored three books of poetry and was widely published in literary journals and magazines. Her first book, Grave Rubbings, tells the stories of her ancestors buried in St. Vincent Martyr Cemetery in Madison.

Ann served her community as a member of the Mountain Lakes Board of Education and was Board president from 1983 to 1985. She was a devoted parishioner at St. Catherine of Siena Church, where she taught CCD, sang in the choir, and became a valued member of the scripture study and prayer groups. She did everything in her considerable power to set an example of faith, love, and service to her children and grandchildren.

She was a fierce competitor who loved to play all sorts of games, particularly Scrabble, Monopoly, and gin rummy. An ardent Yankees fan, she often sent her grandchildren to check the score. Her lucky tip to play "5 in the 5th" paid off more than once.

She is also survived by siblings Anthony Lupardi and Philomena Ippolito (Dino) and predeceased by siblings John Lupardi (RoseMarie), Carmela Giangola (Mario), and sister-in-law Lorraine Lupardi. She will be missed by sisters-in-law Marie and Alice, many loving nieces and nephews, and dear friends.

Visiting hours will be held on Tuesday, January 25th from 4pm to 7pm at the funeral home.  A Mass of Christian Burial will be celebrated on Wednesday, January 26th at 11 am at St. Catherine of Siena Parish, 10 N. Pocono Road, Mountain Lakes NJ.  Interment to follow at St. Vincent Cemetery, Madison, NJ.

Share Your Memory of
Ann
Upload Your Memory View All Memories
Be the first to upload a memory!
Share A Memory