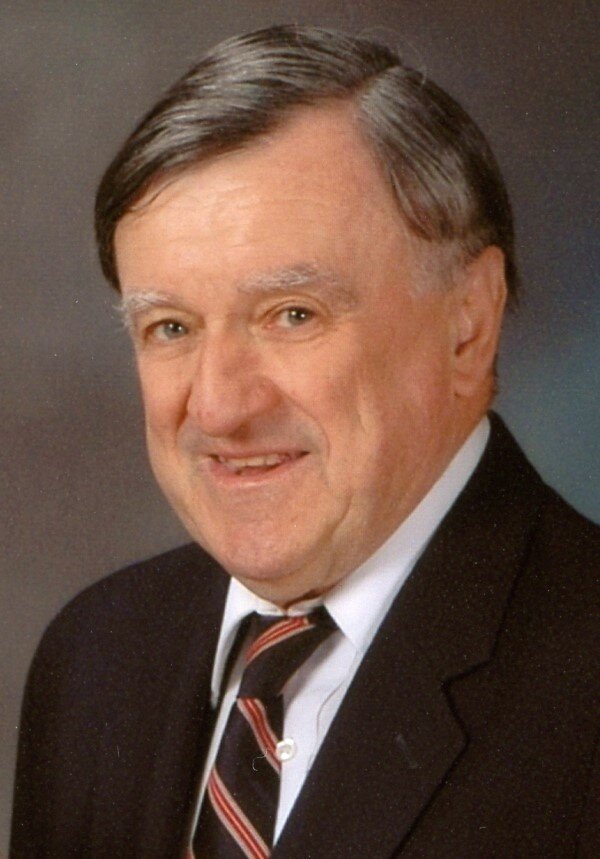 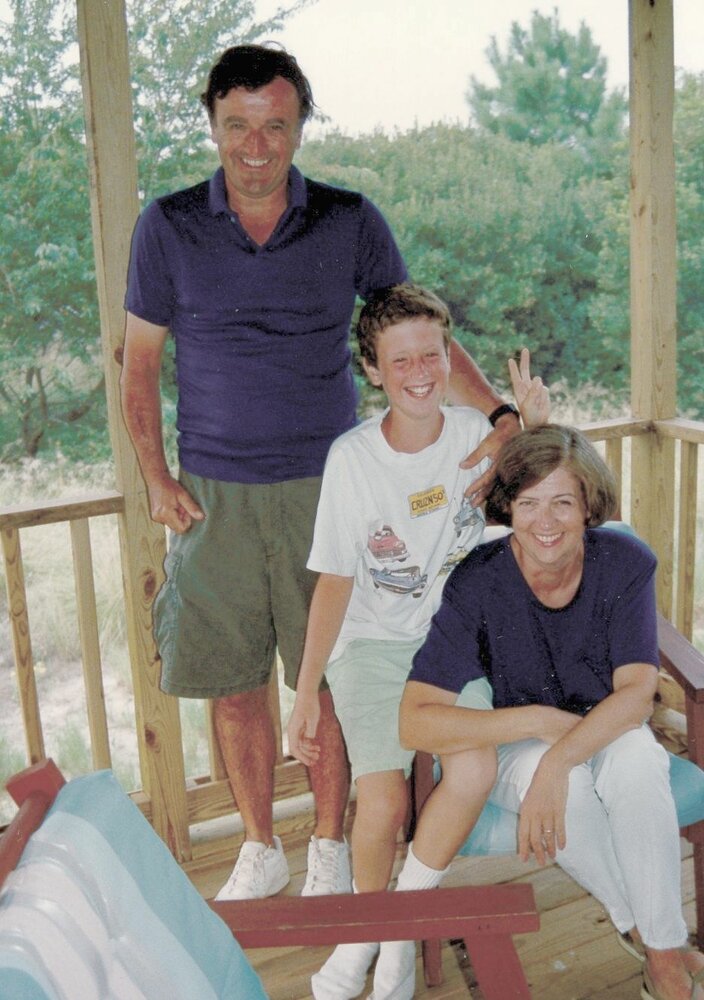 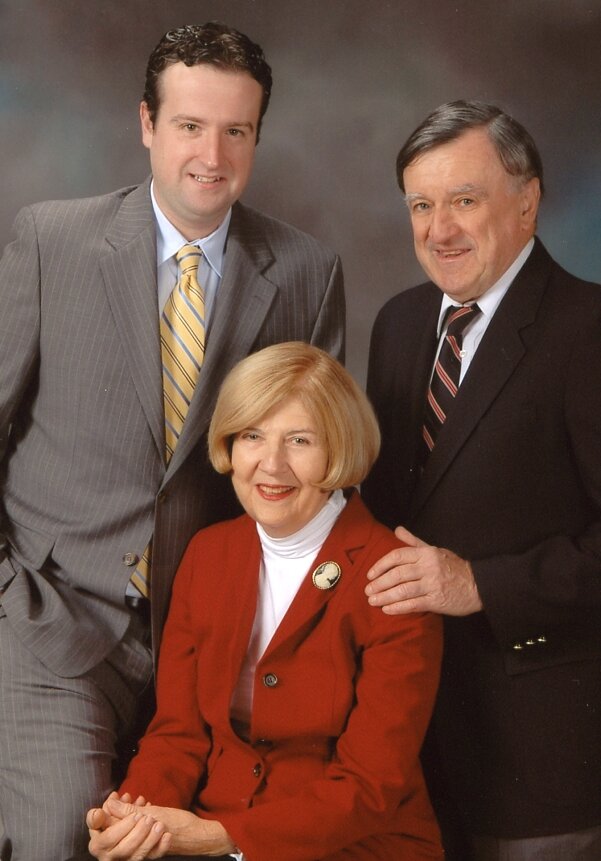 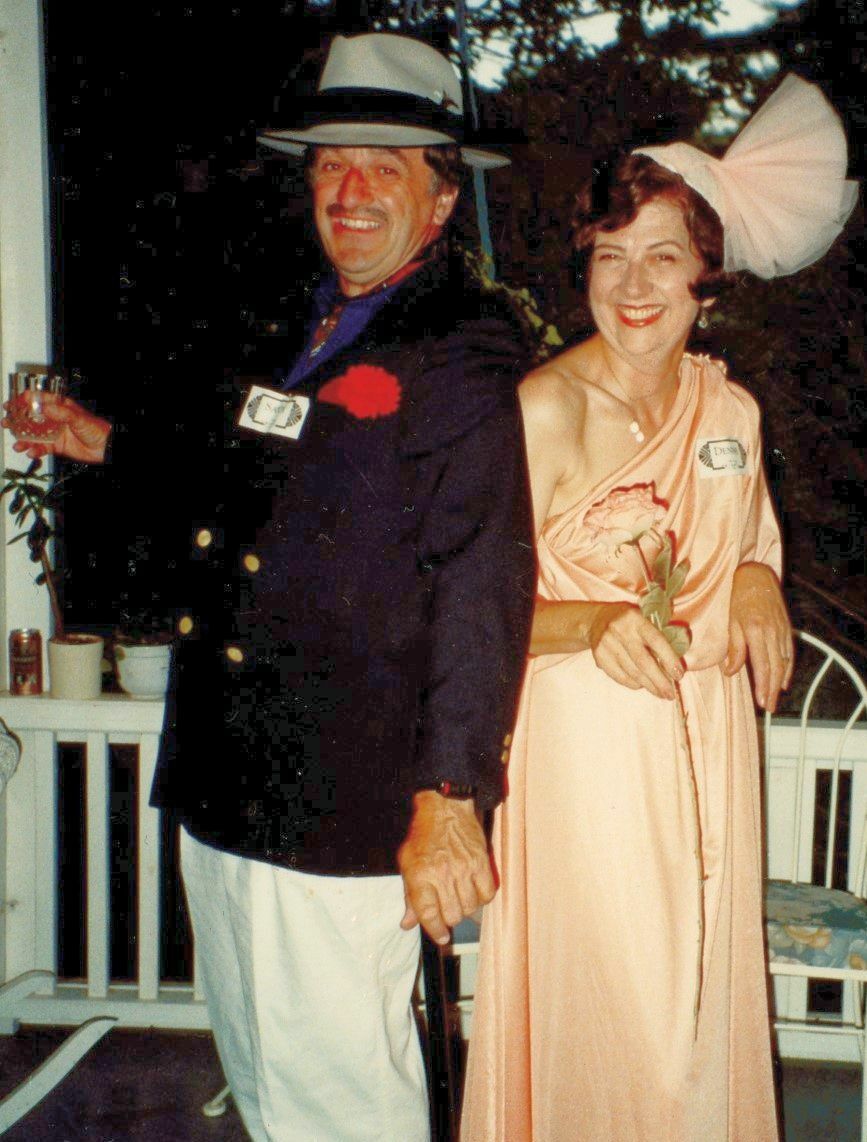 Print
Loading...
D
Dorothy Craver Kurz posted a condolence
Art, you were quite a young kid whose favorite dessert was apple cake when your mother invited us to your house for supper. As a former Pan Am stewardess and roommate of your mom, then on a trip with my husband and four kids, I had phoned Jan. She boldly invited all of us to your house for supper. The only thing on your mind at that time was the dessert: apple cake---of which you reminded everyone constantly! (I’m guessing that apple cake probably remains one of your favorite desserts.) I regret that, at the time of Jan’s death, I was unaware of it and only much later spotted an email address as spam in an old account---too late to locate Jan’s obituary. I certainly would have responded had I known because I knew Jan as a wonderful person! That dinner years ago was the only time I talked with your father; yet in witnessing the interaction, it became obvious that your parents were a great couple. I send my sincere sympathy. Dorothy Craver Kurz
Please wait
Share Comment
L
Lynn Seymour posted a condolence
Such a beautiful and fitting tribute to Frank. I so enjoyed the wonderful family pictures. The Owens were a fun-loving group! Condolences, Art, to you and your family. You all brought so much joy to Jan and to Frank. My favorite memories of Frank and Jan were around a table, eating something fabulous Jan had cooked, having a drink or two and talking politics and/or college basketball!! Such fun, so many laughs, and maybe today, in memory, a few tears!
Please wait
Share Comment
A
Azikiwe Rich uploaded photo(s) 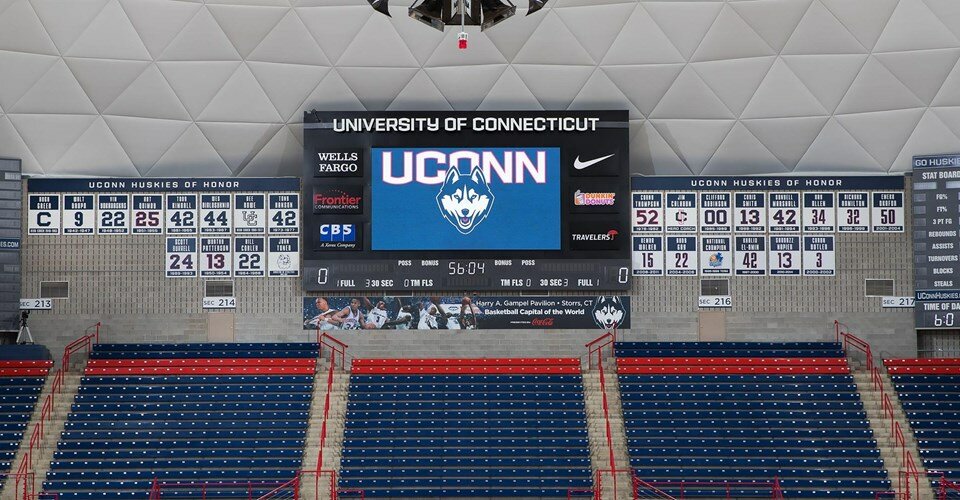 Although I only interacted with Mr. Owens on a few occasions, that did not matter. Always gracious. Always met with a smile, coupled with a handshake. Over the years, I learned this about Mr. Owens: he was a huge fan and supporter of UConn basketball, disliked Boston College anything, he adored his family, especially his granddaughter, Keavy, and his son thought the world of him. We have known Art and Katie for over 15 years now. They are family and family is not defined by blood. Our thoughts and prayers are with you today and always. A new guardian angel watches over you. Love, The Rich Family (Zeke, Risa, Alex)
Please wait
Share Comment
k
kevin wronko posted a condolence
I was so happy to hear from your Dad this Christmas. I responded immediately. How could I not....it was Frank Owens! What a class act and with his Jan, what a team. Our conversations were always great. Frank was devoid of ego, a great conversationalist in an era of it being a lost art. A twinkle in his eyes, a laugh always present. A dram or two of the olde sod's 'water' adding to the flow of talk. He will be missed by many. Out thoughts are with you.
Please wait
Share Comment
c
camille t. potter posted a condolence
Most sincere sympathy to Art, and family. Whenever your dad spoke of Keavy, I could hear the smile in his voice. "Sometimes you have to tell your friends that this is where I stop on this road with you. And if they really care about you, they will tell you thank you for coming this far with me." (Natashia Dion) ...so, thank you Frank. Camille Potter
Please wait
Share Comment
B
Bill Davis uploaded photo(s) 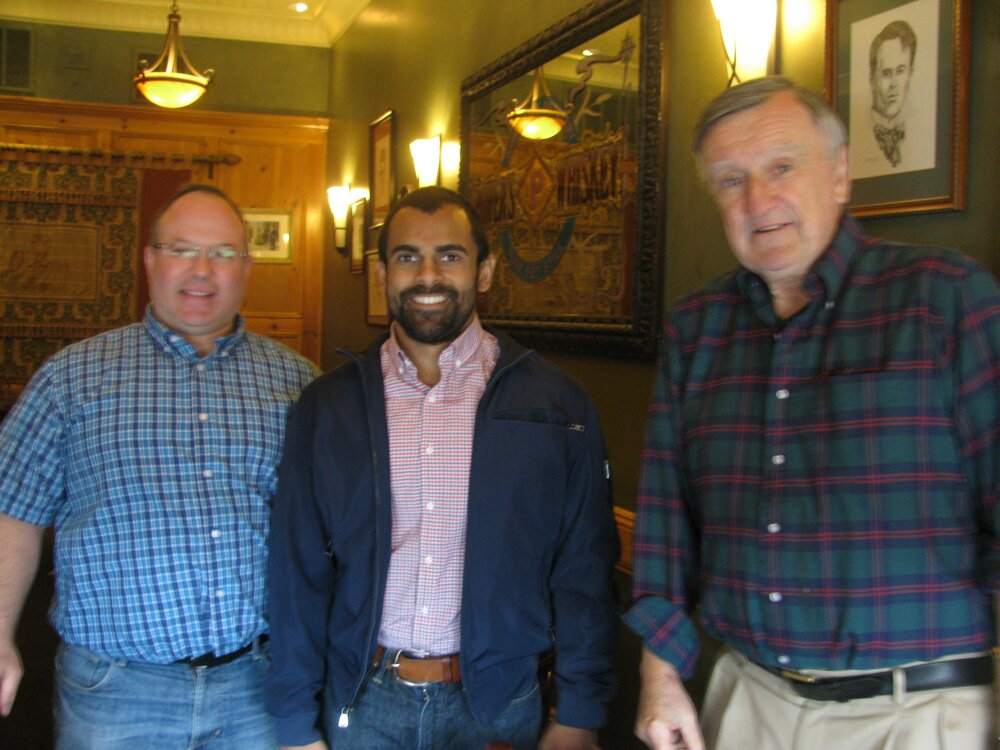 Please wait
Share Comment
B
Bill Davis Posted Jan 13, 2022 at 10:30 AM
Frank with buddies Chris Pizzo and Raj Patel
Report
J
Jim DellaValle posted a condolence
I met Frank in graduate school at the University of Connecticut and we shared an apartment together for several years. We came from very different backgrounds; Frank from The City and me from a small coal mining town in Western Pennsylvania but we both went to small Catholic colleges and we got along just great. He was easy to get to know and we had a common love for sports like basketball and tennis. It was quite an exciting time in our lives - meeting new people, attending classes, teaching and having our minds stretched to the limit learning all the great ideas of advanced math and physics. We pretty much lived a subsistence existence on our graduate teaching assistant stipends but it didn't really matter because we loved learning and we just knew that, of course, we would eventually be successful. As time went on and we would get discouraged the question always came up: "When are you getting out?" as we all sort of felt trapped at times. Well, we all eventually "got out" and Frank went on to be a research physicist and I a college professor. We would meet occasionally with friends in the city but then Frank met Jan. I was best man at their wedding and I know that they had a very happy, loving relationship. As time went on our lives took different directions and we saw less and less of each other. The last time I saw them was at a family reunion at my sister's in New Jersey and Jan was not well. A couple of attempts to get together were not successful, most recently due to the covid pandemic. I was shocked to hear of his passing. I will miss my friend Frank very much .
Please wait
Share Comment
B
Bill Davis uploaded photo(s) 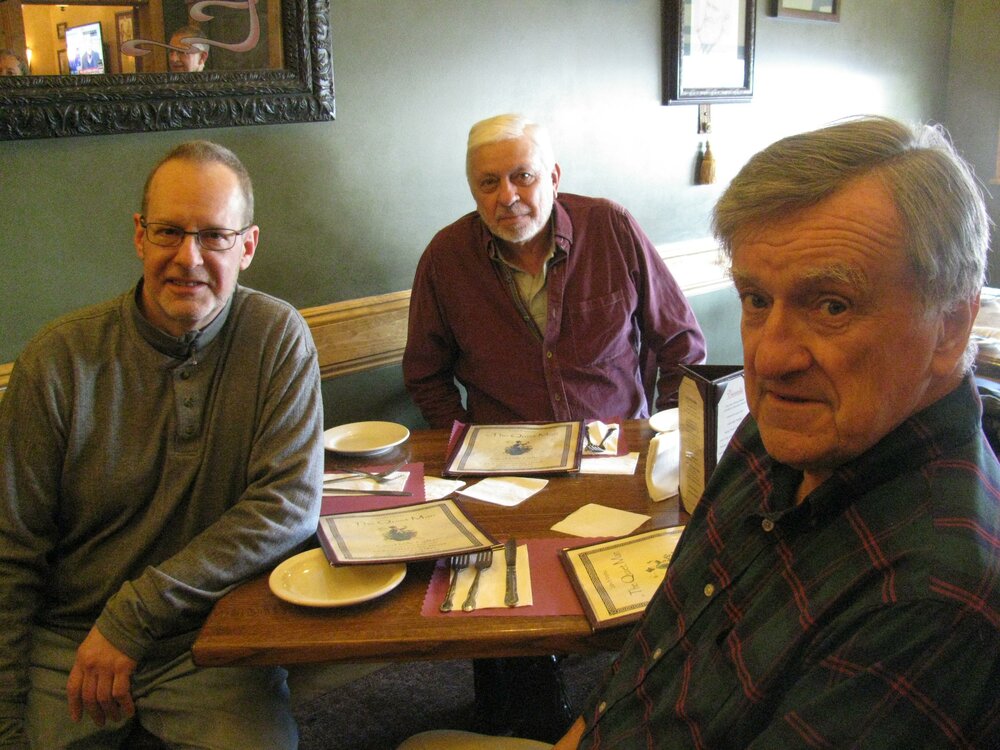 Frank with Ted Gora (center) and Bill Davis at the Quiet Man in Dover for the de rigueur fish & chips.
Please wait
Share Comment
B
Bill Davis posted a condolence
Deepest sympathies to Arthur and Kate and the rest of the family. I worked with Frank for a couple years starting in 2005 and we were hall neighbors up to his retirement. Frank did me a great turn by helping me with a major career shift into his area. I enjoyed many of his stories and jokes, and even heard him sing Irish ditties a few times. Nor were we hesitant to discuss physics and some of the interesting characters we both knew at work, like the "Crazy Colonel" (his terminology). After he retired I would occasionally get together with him and Ted Gora at the Quiet Man in Dover. The world has lost a great physicist and kind, funny soul; Heaven has gained. Be well, Frank, see you again one of these days. Bill Davis
Please wait
Share Comment
J
The family of Frank J. Owens uploaded a photo

Please wait
J
Jonathan Guldin posted a condolence
My condolences to everyone on Frank's passing. Over the years I have come to love the Owens family--Art, Katie, Keavy, and Robert and his family. And while I only actually met Frank on a handful of occasions, he clearly has had and will continue to have a positive, lasting impact on those that loved him, and I think his obituary succinctly captures the father and husband that I perceived him to be. My favorite memory of Frank is the first time I met him. We were in law school and for some reason we needed to stop by Art's house in Denville on the way to a pickup basketball game. At first we didn't think anyone was home, but we found Frank sitting on the back porch. I think he was retired at the time. Nevertheless, there he was sitting at a table with one of those old black-and-white notebooks working out quadratic equations or some higher form of math that I could not comprehend. I think he was working out equations for a book on nanotechnology that he was writing at the time. I then spent the car ride with Art to our game listening to him explain to me how Frank once fought a "failure to stop" ticket that he had received at Picatinny Arsenal based on the argument that "0" on a radar gun was not a stable number or something like that and thus they could not prove that he did not come to a complete stop. It was a memorable introduction that I've never forgotten.
Please wait
Share Comment
O
The family of Frank J. Owens uploaded a photo

Please wait
S
Stan and Sandie Sebastian posted a condolence
So many fond memories of dinners with Frank and Jan. Frank had a great sense of humor and we seemed to feed off each other...many laughs shared.. We remember Jan and Frank at our Halloween parties...one time Jan in her original Pan Am stewardess outfit ( yes it still fit her after over 20 years !!) and Frank dressed as an airline hijacker The photo posted of Jan and Frank as a "gangster" was from a Murder-mystery at our house. Always up for a good time! .Frank always cracked us up when he started talking with that Irish/Scottish brogue. Stan would get lost when Frank started up with his Physics/science tangents on nanotechnology and so on....a brilliant mind. Sometimes when his hair was askew, he reminded us of Albert Einstein. He was a one of a kind. He will be missed. Sandie and Stan Sebastian
Please wait
Share Comment
R
Ronnie Vogel posted a condolence
I loved Frank, pure and simple, and Jan approved. My husband introduced me to Frank in 1970. We went to Frank's bachelor pad to talk about my applying for an NSF fellowship working with Frank at Picatinny Arsenal. My first impression was the stack of New York Times newspapers that reached all the way to the ceiling. We never let him forget it. I did work closely with him for two years. Even though I was the only chemist amongst physicists and the only female amongst guys, he and everyone in our group treated me with respect and friendship. Frank was a true gentleman. We met Jan when she was a Pan Am stewardess and the four of us became fast friends. There was a whole group of us: Vogels, Owens, Garretts and Christoes, husbands and wives, all having met through Picatinny. I'll never forget my husband's 40th birthday party; Frank called and said they couldn't come. Why not? Jan is having the baby. I forgave them. We spent so many happy times together at their house and ours. Of course, they decided to move into Denville just as we needed to leave Denville. For many years they spent Christmas at our house in Montvale with Art who would eat only hot dogs. We also spent many Fourth of July holidays in their back porch. And it wasn't just the holidays; there were many ordinary but oh so wonderful dinners together. Their friendship was so very important to us - they were family. We went through Jan's illnesses and Frank's heart problems with them. Neither of them ever complained. When Jan died, I tried to comfort and keep in touch with Frank. When my husband died two months ago, Frank did the same for me. I know that out of habit I will still pick up the phone to talk to him. I could go on and on but for your sake, I won't. I admired Frank not only as a friend and husband but as a scientist. Even after retiring from Picatinny, he continued to teach, keep up with new discoveries, publish more papers and write and publish a book. He is a friend I cannot replace and will miss desperately. I raise a scotch to toast you, dear FO. Love, Ronnie
Please wait
Share Comment
<< Previous Next >>

Share Your Memory of
Frank
Upload Your Memory View All Memories
Be the first to upload a memory!
Share A Memory