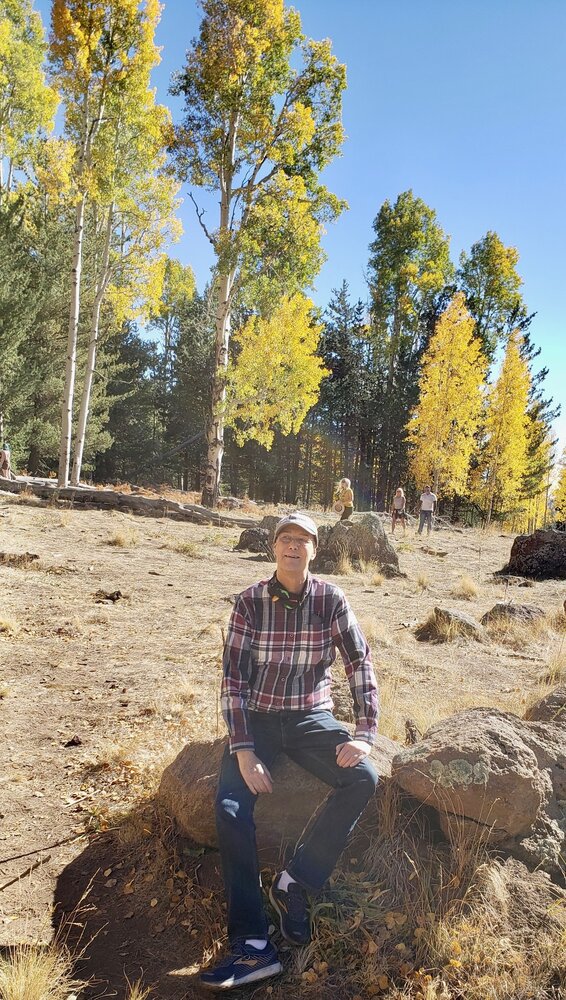 10:00 am - 11:00 am
Norman Dean Home for Services, Inc.
16 Righter Avenue
Denville, New Jersey, United States
We kindly ask that you wear a mask if you plan on attending.

"You can always tell where a beautiful soul has been by the tears and the smiles left behind."

Daniel Alan Holterman passed peacefully on September 27th in the arms of his devoted husband,   Gary. At that blessed moment Gary closed his eyes and saw Danny turn and smile as he crossed into heaven.

Friends and relatives may pay their respects on Tuesday, October 5th from 4-7 pm at the Norman Dean Home for Services, 16 Righter Ave., Denville, New Jersey.  Friends and relatives can also share their memories of Dan at the memorial service on Tuesday at 6:15 pm. A funeral service will be held the following day on Wednesday, October 6th at 10 am at the funeral home, followed by Dan’s burial at Restland Memorial Park, East Hanover.  Masks must be worn for all services.

If anyone wishes to make a donation in Danny’s memory, please consider the American Cancer Society by way of www.inmemof.org.

Born on a beautiful day, June 19, 1958, Dan was one of three children to bless the Holterman family.  Danny grew up in an authentic log home that was built in the 1900’s.  The home was situated in the woods in Montville, NJ and had a small lake behind the house.  Danny would walk on the trails, sled down the hills and hike by the stream behind his home. Danny would also ride an old unregistered Fiat through the woods with his friends and paint it different colors for fun. Danny’s family breed and showed Siberian Huskies which was a relatively new breed in the 1960s. He adored all his boyhood pets, including a baby garter snake which he thought would make a good house pet. The snake was wounded so Danny wrapped it in a band aide to help it heal.  He also had a great love for box turtles. He and his older sister would collect them each summer, then let them go before fall set in.  With his beautiful blond hair and love of the outdoors, it was hard to miss him playing in the neighborhood. It was even harder to miss his beautiful smile that was so welcoming and warm. Dan also had a wonderfully dry sense of humor that would sneak up on you and when you got the joke, friends were left in tears of laughter by Dan.

Dan graduated Montville Township High School in 1976 and later completed his first two years of college at County College of Morris in New Jersey before transferring to complete his Bachelor of Science degree in Microbiology at Pennsylvania State University in 1982. His final academic degree was a Ph.D. in Biomedical Sciences at Eastern Virginia Medical School where he graduated in 2003.

Dan shared 63 years of love and kindness with everyone he met. There was a gentleness to Dan’s personality, not to be mistaken for weakness, for Dan was an incredibly strong person.  His strength can best be explained by his unending zest for life.  He told Gary because of his illness he greeted each day as a gift. He always adapted and made the best of all situations.

Dan devoted his professional life to his greatest passion, medical research. Early on in his career as a cancer research scientist, Dan embraced “personalized medicine” because he felt each person and their cancer was unique and needed to be treated that way. Today, 20 years later, that is the standard of care for medical treatment.  Many times, friends or family called Dan if they or a loved one had cancer.  They knew Dan would help them with medical problems and questions.  He offered the information that he learned and if he did not have the answers, he would research the latest treatments and clinical trial at leading medical centers. With this information Dan would give them options, advice and hope. In addition to being a good scientist he was compassionate, because he knew first hand what they were going through.

Dan loved animals and in high school he worked at a veterinarian clinic,  Perhaps this was the start of Dan’s passion for pursuing his path into the medical research field. Dan love dogs and cats and all animals.  But breeding and showing Birman cats later became a long time passion for him and Gary. Danny was always good at finding a way to Gary’s soft spot in his heart. Dan and Gary went to a Cat Show and Danny put a Birman kitten in Gary’s arms that started their long time love affair with these beautiful and loving companions. Helena and Inouie were their first two cats and for a few years they each had a litter of the cutest little kittens and what a bundle of joy they were. Dan and Gary had Helena and Inouie for 18 years.  After they passed, they got two more Birman cats, Angel and Amadeus (aka Toughie) both turned 18 this year. Angel is still with us and made the journey to Houston to be with Dan and Gary to comfort them and give them unconditional love.

Dan loved many things: his family, friends, flowers, gardens, and nature in general. Dan and Gary had beautiful gardens in all the homes they had with two of their home gardens being featured on garden tours. Dan was the master gardener while Gary was the labor – but Gary loved every minute of labor performed because it made Dan happy. All Danny had to do is smile and he won you over. Dan and Gary had a cabin in the mountains of Pine, Arizona with more rustic natural beauty.  But there too, Danny had irises to beautify the yard. More often the cabin was a retreat in the mountains to enjoy feeding the birds, deer and elk that came by for a visit. Dan loved the cicada at night lulling him to sleep, the beautiful sunsets and magnificent stars at nights with the Milky Way sprawling across the evening sky. Dan especially loved the rain – watching it, listening to it and walking and playing in it.

Dan was also an excellent cook.  Which was lucky for Gary, since Dan did all the cooking for their 41 years together. Dan would experiment with new dishes all the time. If he didn’t have certain ingredients, he would substitute and make the dish better. People enjoyed cooking with Dan, or baking, or making bread with Dan; he made it fun. Cooking brought Dan joy because he was doing it for someone else.

Dan was content to stay home and read a book to relax. More often than not he would have one or two beautiful Birman cats curled up with him or nestled in his arms. Dan also loved to travel. He and Gary, sometimes with a group of friends, traveled to Europe several times. Dan was always patient with Gary, since Gary had to see every museum in town so they arrived at a bargain; Dan got to get see or enjoy a garden for every museum that Gary wanted to visit.  Many times, they ended the day enjoying a fine meal and good bottle of wine.

Dan would advocate for social causes to make the world a better place. He and Gary served on many non-profit boards. Dan was President of the Arlington, Ashton Heights Home Owners Association, advocating to improve the neighborhood, make it safer, and took steps to see that the zoning protected the architecture and natural beauty of the area.  But Dan was most proud of his time serving on the board of Arizona Multiple Myeloma (AZMM).  Not only was he a founding board member, but he was their scientific advisor. He helped convene a high level medical research conference every year for 10 years.  This annual conference invited the best doctors in the country who were leading the fight to cure Multiple Myeloma (MM).  They shared their findings with approximately 300 patients and Caregivers to help them learn about the latest treatments for their disease.  AZMM also did outreach to the Navajo Nation reservation in northern Arizona by hosting an annual conference.  The purpose was to educate Navajo people on self-care, nutrition, and most importantly the treatments that were available to them for cancer. This was met with huge success as the Navajo people are often an overlooked and underserved population.

Dan fought a battle with cancer for 33 years and, luckily for him and Gary, Dan had 27 years of cancer free remission.  Throughout his life he fought this battle with unstoppable determination and with an incredible scientific mind for research, thereby finding the best and most advanced treatments. With the love of friends and family that supported him and Gary on this journey these many years Danny remained strong willed and fought the long battle with grace.

Dan shared a beautiful life with his husband, Gary Egan, who will cherish the memories of their long time love affair of 41 years. He is also survived by his two sisters Donna Ciancitto and Dawn Holterman, 4 nieces, 1 nephew, 5 great nieces and 2 great nephews. Dan is also survived by his beloved and much cherished 18 year old Birman cat, Angel.