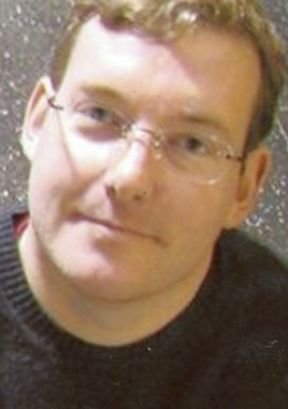 Brett Everett Ball, age 48, of Denville, said “Later losers” and departed this life on Monday July 5, 2021 after a well fought battle with cancer. Born March 9, 1973, he was the son of Larry and Joann “Penny” (Balestrino) Ball of Sussex. Brett spent his early years in Lake Stockholm, NJ, where he mastered the art of “muck walking”, which is exactly what it sounds like. It was there he learned to swim, fish, and ice skate.

He graduated from Hardyston Twp school before moving to Sussex and graduating from High Point in 1991, where he played on the soccer team. He then went on to earn degrees in Political Science and Religious Studies from Allegheny College, as well as an MBA from Shippensburg University.

An avid Rangers fan and a hockey player himself, Brett spent countless hours on the ice as well as a considerable amount of time in the penalty box while playing for Allegheny’s club hockey team, and also an intramural floor hockey team called The Pucks. He continued to play in various local leagues over the years. His love of comic books was unmatched by anyone over the age of 15. Having been a bit of a stoic, one of his only smiles on record happened while visiting Godzilla’s Walk of Fame star.

His greatest joy, however, came from his family. Brett married Meng-Chin “Niki” Hsieh in 2006, and they settled in Denville and had two daughters, Avery (named for Sean Avery) and Amber (because Gretzsky didn’t seem appropriate). Brett quickly adjusted to life with all girls and attended numerous dance recitals and dutifully learned the names of the My Little Ponies. But no matter how pink the bedrooms or how big the bows, he made sure the girls owned NY Jets Jerseys and rooted for the Mets. He enjoyed spending time with Niki and the girls watching sports, playing video games, apple picking, swimming, taking trips to Disney, and visiting zoos and beaches. Niki was not just his caregiver during his illness, but a perfect partner and his biggest supporter throughout their years together. He could not have done it without her-partly because he would have had to do his own laundry.

Brett was once hit in the side of his head by a bird while driving, and his daughters have declared it one of their favorite memories. It appears they have inherited his sense of humor.

Brett will be remembered for his intelligence, quick wit, wicked sarcasm, and sideways smirk…and will be extremely missed for the same.

He was preceded in death by his paternal grandparents, Everett and Doris (Cathcart) Ball; and his maternal grandparents, Donato and Anna Mae (Roseberry) Balestrino. He is survived by his loving Wife Meng-Chin “Niki” Hsieh and his adoring daughters Avery Hsieh Ball and Amber Hsieh Ball all of Denville, NJ, his parents Larry Everett and Joann “Penny” Ball of Wantage Twp., NJ, sister, and Kimberley Ball of North Royalton, OH. In 1980 she ate his vanilla ice cream, and he never let her forget it.

Shortly before he passed, Brett received a video message of encouragement from Sean Avery.  We can’t tell you what it said, because the language was that of a hockey player. But take our word for it, he thought it was pretty awesome.

Private services were held at Frankford Plains Cemetery, Augusta. Donations may be made to Saint Clare’s Hospital-Katena Center for Mother and Child, 25 Pocono Road Denville, NJ 07834, for the care they gave during the birth of his daughters. We would like to thank the VNA Hospice staff who cared for him with unwavering compassion, and send a special thank you to his friends, both old and new, who loved and supported him to the end.

It was an amazing ride.

Share Your Memory of
Brett
Upload Your Memory View All Memories
Be the first to upload a memory!
Share A Memory