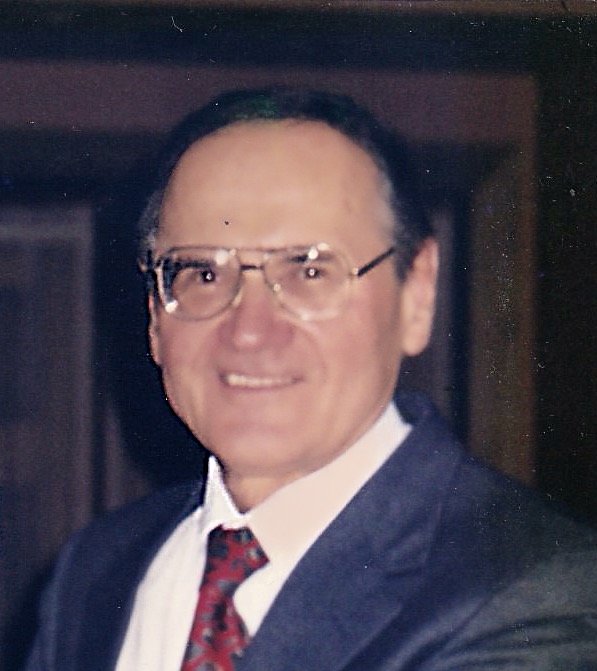 Walter (née Wolodymyr) Dzingala died of natural causes at the age of 95 on Saturday, November 28, 2020 at home surrounded by family.  “Vlodko”, “Walt”, “Tato”, “Dido” or “Mr. Walter”, as he was known to family, friends, colleagues and caregivers, lived a long and adventurous life centered on his values of a good education, perseverance towards a goal, and commitment to family and community.

Walter was born on February 1, 1925 in the rural village of Verkhobuzh, in Lviv Oblast of Western Ukraine. He was the son of Stefan Dzingala and Tekla Dzingala (née Melnyk), and brother to Eugenia Hlushko (née Dzingala). After completing elementary school in the village, Walter spent most of his youth away in boarding schools. He didn’t have much – but what little he had, he often traded for a much-coveted soccer ball.

Upon graduating from high school in Lviv, Walter evacuated to Germany in 1944 where he served as a translator in the Ukrainian Liberation Army Division during World War II.  He was held as a prisoner of war in Rimini, Italy from 1945 to 1947 by the British Army. The British Army transported him to Ipswich, England where he was eventually released in 1948.

As an immigrant in post-war England, Walter continued living in Ipswich where he worked as a hospital medical technician. In 1952 he moved to the big city – London.  There he studied Mathematics and Applied Sciences at London University and developed a life-long taste for fish and chips.

In 1953, Walter got sponsorship to immigrate to the United States where he settled in Newark, New Jersey.  He earned both Bachelor of Science and Master of Science degrees in Chemical Engineering from Newark College of Engineering (now New Jersey Institute of Technology) and became a licensed Professional Engineer.  Walter had a long and commendable career as a Research and Logistics Engineer for the US Department of the Army, Picatinny Arsenal, New Jersey before retiring in 1995.

As a young man, Walter’s hobbies included skiing, swimming, and Soyuzivka (a Ukrainian Heritage resort in the New York Catskill Mountains).  It was at Soyuzivka where he met his wife of 54 years, Dr. Lubomyra “Luba” Klymyshyn-Dzingala. Together they settled in Denville, New Jersey – where they raised 2 daughters, Christina Dzingala and Larisa Dzingala Warjanka, with the same adventurous spirit and values of education, perseverance, and community.

Walter was an avid photographer.  He often took his family on road-trips in pursuit of the perfect shot, although rarely making reservations. In retirement, Walter and Luba enjoyed international travel with friends.  By then, he researched every destination with precision and made sure they had lodging.

In 2010, Walter and Luba moved to Lake Shawnee and shared their new lakeside community with friends and family, hosting many a get-together at their lake house.  Walter enjoyed swimming and boating with his 4 grandchildren Luke Warjanka, Sierra Warjanka, Hannah Warjanka, and Aliyah Warjanka.  Walter tried fishing, but by that point in life, he admitted that he no longer had the same patience for the sport as son-in-law Michael Warjanka.

Walter Dzingala was a hard-working man, dedicated to his family.  He lived a good, long life following his motto “Work hard, eat well, and exercise.” After a 95 years, may he now rest in well-deserved peace.

Funeral Service will be live streamed on Facebook for those unable to attend in person.

As an expression of sympathy, memorial contributions may be made to any of Walter’s favorite charities:

Please accept our sincere condolences on the passing of Dearest Walter, your beloved Husband, Father, and Grandfather.  He is now at peace in Heaven.

We all have known Vlodko for many years.  He was always a very friendly, inquisitive, and easy to talk to member of our small Morris County Ukrainian American community.

I, however, would like to give my own impressions and experiences being his friend.

About 25 years ago, when our children finished their studies at the Universities, we found it possible to take extended travel vacations.  It turned out that Luba and Vlodko were also interested in such travels. We started with visits to the US National parks. Vlodko always offered traveling commentaries about the beauty of each place we visited.  We visited Yellowstone with its Old Faithful, Grand Canyon, the beautiful geological wonder.  Then, there was a fantastic tour of the Canadian Rockies where we saw the majestic ice fields.  Vlodko was amazed about how the ice field moved.  These ice fields are almost all melted by now.  Together, we enjoyed an overnight dinner train ride over the scenic Canadian Rockies.

We decided that we were ready for the International adventures.  London was our first such tour.  Vlodko was in his element.  He took us to the University where he studied. We walked for an hour till he found a restaurant that serve real fish and chips in traditional paper wrapping. We also found a restaurant that served Borsch. We visited the Tower of London.  A tour bus took us to the Stonehenge.  In those days we still could walk inside and touch the giant stones.  Vlodko could not stop talking about this, 5000 years old, mysterious structure.  The bus then took us to the Shakespeare’s Stratton on Avon.

Before each of our trips to foreign countries Vlodko would write down, and give us copies, of useful questions, in that country’s language, such as where is a restroom? In Belgium, we stayed overnight in Brussels. That evening we spent an hour searching for a restaurant that served Belgian Waffles, without success.  We were disappointed.

Then we went on a tour of Italy.  In Rome we visited the Sistine Chapel.  Back then, the tourist crowds were tiny compared to today.  Vlodko, as usual, marveled out loud about be beauty of Vatican. In St. Peter’s Vlodko spotted a Ukrainian Confessional Booth.  It was a very cold March for Italy and we had no warm clothes. Vlodko showed me how to stuff paper into my hat to keep my head warm.  We sailed to the beautiful, just like in the movies, Isle of Capri.  We also visited the Pompei excavations where Vlodko verbalized his amazement of what we saw.  In Venice Vlodko spotted a tourist group from Ukraine.  He came right up to them and struck up a conversation with them.  He asked why they were in Venice on the day that there were the first free elections in Ukraine?  There was silence!

We also took a vacation tour of Paris.  This was year 2000.  Our tour included an evening sailing on the Seine.  Imagine sailing in the middle of a city, all lit up, and observe, closeup, the Eiffel Tower all lit up with gigantic electric 2000 display on all four sides of the tower.  It was beautiful sight, and Vlodko could not stop talking about it.

The most memorable adventure we had was on the day we leaving Paris.  With about an hour to kill, we decided to do some souvenir shopping in the area.  We started to go back but were lost and did not know the name of the hotel or the street it was on.  Vlodko went into a store and talked to a woman inside. Somehow, he got her to understand.  She come out and pointed the direction to the hotel.  We caught the bus with 15 minutes to spare, thanks to Vlodko’s communications skills.

When we think about the interesting and enjoyable travel vacations we had, you Luba and Vlodko always come to mind.  And, Vlodko added to this enjoyment with his voluminous comments and observations.  Vlodko, we will miss you.

Thank you Vlodko. Rest in Peace.

May His Memory Last Forever!

Share Your Memory of
Walter
Upload Your Memory View All Memories
Be the first to upload a memory!