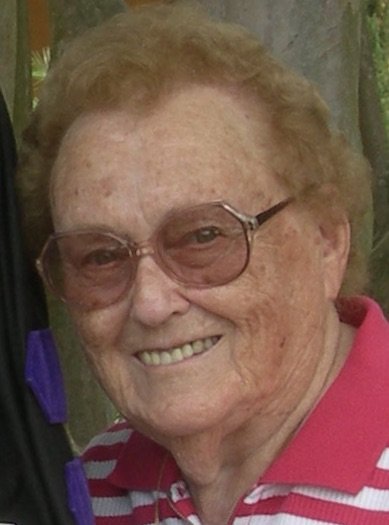 Margaret Ellen Davis Pietka Rosenzweig passed away peacefully on Friday, March 20, 2020 at Trustbridge Hospice at John Knox Village in Pompano Beach, Florida. She was only a few months shy of turning 100 years old. A Memorial Mass will be celebrated on Saturday, July 18, 2020 at 10AM  at St. Mary’s Church in Denville, NJ. Burial will take place on Monday, July 20, 2020 at 12 PM at St. John’s Catholic Cemetery in Darien, CT.

Peggy was born to the late Esther and Frank Davis on July 14, 1920 in Bronx, NY. She spent her childhood in New York living through the the era of Prohibition and the Great Depression with her older brother Seymour and her younger sister Pat.

As a young woman, Peggy moved to Stamford, CT where she met her husband Edmund Pietka. Together they raised their children, Michael, Mark and Jo Ann. Additionally, they owned and operated Oven Fresh Bakery (“We can’t bake like mother but mother likes our baking”) until soon after Eddie’s death.

Many years later, Peggy married Herbert Rosenzweig. Together they retired to North Port, Florida and traveled throughout the United States. Sadly, Herbie passed away a few years after they married.

Peggy continued to travel for many years as a tour group leader for several local travel agencies in Florida. She saw the world visiting such places as Tahiti, Fiji, Australia, Europe, Egypt and China. The only continent she missed was Antarctica.

Throughout her life, Peggy was blessed with wonderful friends and neighbors. She thoroughly enjoyed spending time with them and never turned down an opportunity to be around people.

Above all, Peggy loved her family. They were her pride and joy. She cherished spending time with them, cooking for them and sharing stories of all of her adventures with them.

If you are unable to attend Mass for any reason, you will be able to watch it live by clicking on the link below.

This link will not be active until Mass begins at 10:00 am - link will remain active for 90 days.

Share Your Memory of
Margaret
Upload Your Memory View All Memories
Be the first to upload a memory!