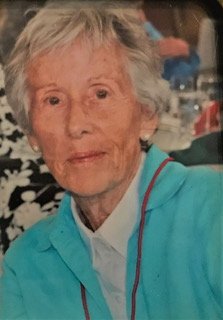 10:00 am - 10:30 am
Restland Memorial Park
77 DeForest Avenue
East Hanover, New Jersey, United States
(973) 887-2050
Due to our current health crisis, only Jean's immediate family are permitted to attend. Please keep them in your prayers.

Born in Englewood, N.J, on August 25, 1927, she was the only child of the late Milton and Janet McQuillin Zeig.

Jean lived in Tenafly and graduated from New Jersey College for Women, now Douglas College, Rutgers University.  She majored in Art and was President of Kappa Pi, an Honorary Art Society.

Jean worked at Stern Brothers in New York City in inventory control.  She married the late James C. Jones in 1950 and they settled in Mt. Tabor, N.J., attending the United Methodist Church there.  Jean lived in Mt. Tabor for 45 years and worked in the Mt. Tabor library where she taught “story hour” and was Senior Library Assistant.

Share Your Memory of
Jean
Upload Your Memory View All Memories
Be the first to upload a memory!