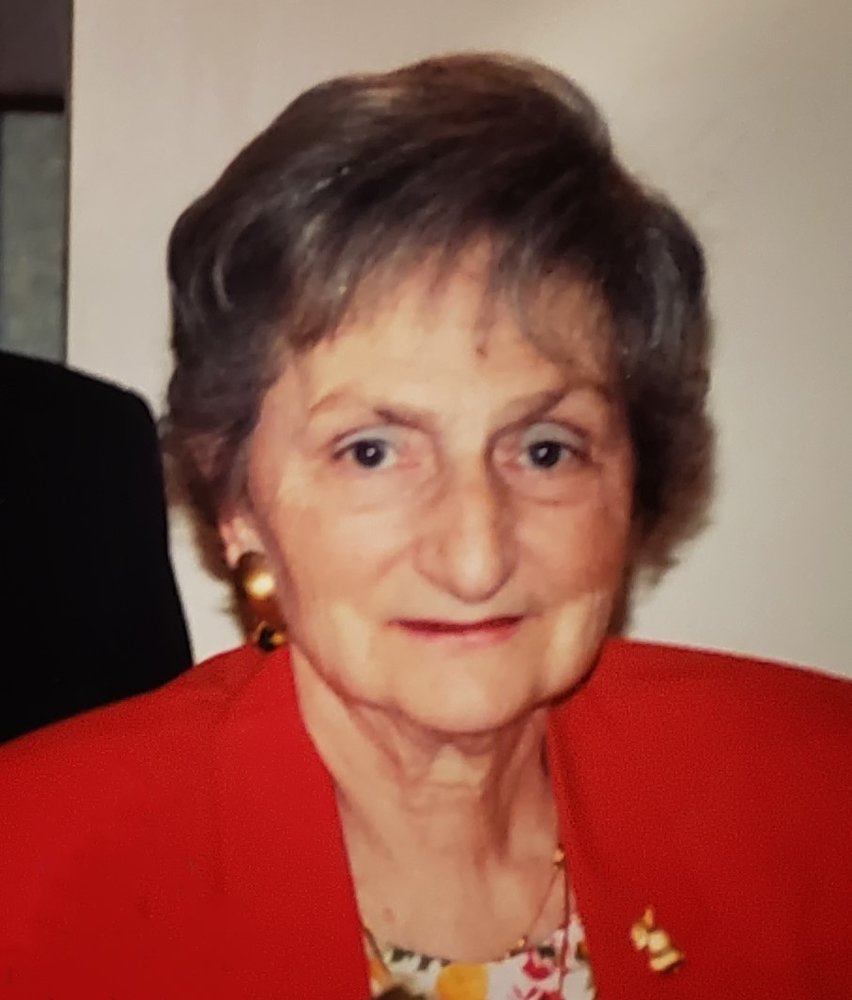 Marie Aragona passed away peacefully on Friday, April 10, 2020. She shared 99 years of love and passion for life with her family and friends.  As we navigate these singular times, we find ourselves in new waters. Due to the current health crisis, only our immediate family is permitted to say our final goodbyes this week. At some time in the future, when we can all be together, we will have a celebration of Marie’s life with those who knew and loved her.  Thank you for your continued love and support.

Marie was born in Newark on April 15, 1921, the youngest of ten children.  She attended Central High in Newark, singing in the chorus, displaying a real talent for music and the arts before graduating in 1939.  Marie took singing lessons with a focus on opera and performed in the opera chorus at Newark’s Symphony Hall. Her high school yearbook, in a section titled “Class Prophecy”, foretold a bright future for Marie: “The opera came to a close, and as the stars met for their final curtain calls, they were met with a round of applause. Marie Blanda, a beautiful Zerlina in her gown of blue, stepped forth beside the leading players. Bravos were being shouted.”  Opera would remain a passion throughout her life.

Marie met her future husband Ciro Aragona prior to World War II and their relationship blossomed as they corresponded throughout the 4 ½ years Ciro was in the service and in combat overseas. She saved every letter he wrote to her and always talked about how beautifully they were written. Five months after returning from the war, Marie and Ciro were married in Newark, Marie working as a secretary and Ciro working part time and attending pharmacy school at Rutgers.

Their first son Steven arrived in 1950 and second son David in 1953. The family moved to Livingston, NJ, and then to Whippany, NJ, where Ciro opened a pharmacy. Marie was the original super mom, helping Ciro in the pharmacy, cooking dinner for their sons and then cooking dinner for Ciro and herself after he closed the store at 9pm. As the boys grew older, she worked as a bookkeeper while they were in school, continuing to help Ciro in the store and being a homemaker while making it all look easy. For a brief time she was involved in town politics, interviewed on local radio and was encouraged to run for a local office.  Marie could do anything she put her mind to, but in the end, her family came first.

Marie loved to entertain. She was a fantastic cook and gracious hostess. She loved music, the arts and fashion, and brought an artistic flair to everything she did.  She and Ciro passed along their passion for music and art to their children and grandchildren. Marie was a voracious reader. She especially enjoyed reading historical novels and biographies of historical figures. Marie chose the quote “Let knowledge grow from more to more” for her high school yearbook profile.  Like many women of her generation, Marie wasn’t given the opportunity to go to college. She more than made up for it in ensuing years, having a drive to never stop learning and even auditing courses at Fairleigh Dickinson in later years.

Marie and Ciro enjoyed 68 wonderful years of marriage before Ciro passed away in June 2014. They were always together and enjoyed life to the fullest, both keeping active well into their 90’s. Above everything, Marie loved her family.  She was proud of her sons and over the moon to be called Grandma Marie by her four grandchildren and many of their friends.  In her later years she was crowned Great Grandma and adored the little ones, Erik and Irene. She was the true matriarch, deeply influencing so many in the family, teaching them how to live life to the fullest.  As we lay her to rest on what would have been her 99th birthday, we take comfort in knowing she is with her beloved Ciro once again, lovingly watching over her family.

Donations in Marie's name may be made to the good work of St. Jude Childrens' Research Hospital, 501 St. Jude Place Memphis, TN 38105 USA

Share Your Memory of
Marie
Upload Your Memory View All Memories
Be the first to upload a memory!