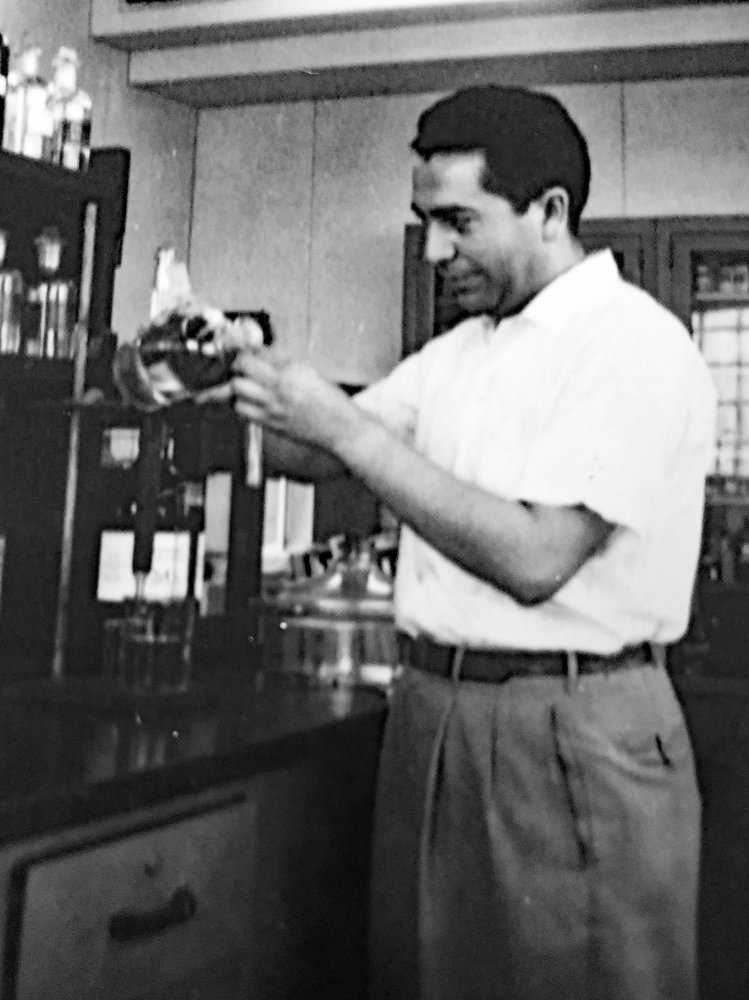 Anthony Cacciola, beloved husband, father, grandfather and great-grandfather, passed away on April 6, 2020 at the age of 93.  Born and educated in Italy, Anthony had a successful career as an analytical chemist in New Jersey, raising his family in Morris County.  His wit, generosity, humility and skills as a raconteur made a lasting impression on nearly everyone his life touched:  relatives, friends, colleagues, and neighbors.

Anthony was born in Caltanissetta, Italy in 1926, and spent most of his childhood and young adult years in Reggio Calabria, Italy, where he obtained a degree in chemistry.  A well-rounded student, he wrote for his school newspaper and fenced, while helping to support his family by working as an apprentice in a pharmacy.  Anthony’s devotion to his family was evidenced when as a teenager during the fall of 1943, in the absence of his father and older brother, he moved his mother and five younger siblings away from the city of Reggio to a farmhouse in the Calabrian countryside to avoid the impacts of the war.  During those weeks he would ride his bicycle back and forth to Reggio for provisions, often stopping for shelter from bombing.

After World War II ended, Anthony met his future wife Mary, a New Yorker whose Italian immigrant parents had temporarily moved back to Italy, an arrangement that unexpectedly extended several years due to the start of the war.  Mary returned from New York to marry Anthony in 1949, and Anthony emigrated to the United States with her shortly afterwards.  Anthony and Mary initially settled in Brooklyn while Anthony taught himself English so he could pursue work as a chemist.  In 1951 they moved to Boonton, NJ and later settled in Rockaway Township.

Anthony worked as a chemist, eventually managing compound formulation and quality control laboratories, for a number of New Jersey based companies that once were leaders in the chemicals and plastics industries:  Drew Chemical, Flintkote, Allied Chemical, and Pantasote.  During his work years Anthony was a member of the American Chemical Society, and increasingly his expertise was called upon to solve OSHA and environmental problems faced by the companies that employed him.  After retiring, Anthony served as an independent consultant to several chemical companies.

Having grown up on the Italian coastline, Anthony loved the sea and was an excellent swimmer.  Initially, family vacations almost always took place at the seashore.  Eventually, as his children moved across the country and overseas, Anthony and Mary began to travel more widely.  Anthony had expert sketching skills and never disappointed when asked to compose a drawing.  He would entertain tirelessly at social events with his story telling, particularly with vivid recollections of life in Italy in the 1930s and 1940s.  As the only person in his extended family who ever emigrated to the United States, he missed his large Italian family greatly over the years.  But he navigated comfortably throughout his life back and forth as both a true American and an Italian.

Anthony is survived by his wife of 70 years, Mary Cacciola; his daughter, Lisa; his sons Don and Ron; his son-in-law Rob Hertz; his daughters-in-law Janet Cacciola and Elizabeth Collier; six grandchildren:  Brenda, Denise, Jeff, Tom, Jill and James; two great-grandchildren:  Oliver and Maxwell; his two sisters Franca Marsili and Iana Benvenuto; and a large extended family including a brother-in-law, several sisters-in-law and many nieces and nephews.

Memorial donations are being accepted by the World Health Organization COVID – Solidarity Response Fund by way of www.inmemof.org. Please leave a condolence, light a candle, and share your favorite memory of Anthony here to continue to celebrate the amazing life he shared with us.

Share Your Memory of
Anthony
Upload Your Memory View All Memories
Be the first to upload a memory!