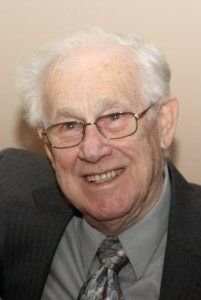 William Francis Conway took his last breath peacefully at a party with some of his closest friends on Tuesday, January 14, 2020. He had shared a century of hard work, laughter, love, cocktails and priceless memories with his family and friends.

Born on August 26, 1919 and raised in Dover to the late Francis and Grace Conway, Bill was the oldest of 7 children. After graduating Bayley Ellard High School in Madison, NJ, he served for 5 years as a Master Sargeant in the United States Army Air Corps during World War II. As a Communications Officer, he was awarded for being the fastest Morse Code transmission operator. Bill attended and graduated from Kansas State University with a Bachelor of Science Degree in Electrical Engineering. He and Evelyn McClary met at Kansas State University, were married there in 1948, and moved to and settled in Denville, NJ in 1950. He had a rewarding career as Chief Instrumentation Engineer at Picatinny Arsenal in Wharton, retiring in 1981.

Bill was an exceptional man, son, brother, husband, father, grandfather, uncle and friend. He served the Denville Township and the Morris Hills Regional Boards of Education for 20 years from the year Lisa was born until the year Leslie graduated from high school. He was also an active and dedicated member of the Denville Rotary Club for 37 years where he had a remarkable record of service; giving his time, talents, and resources worldwide.

He joins his wife of 62 years, his parents, and his siblings, John J. Conway, Cecelia Meeker, and Marie Bishop.

He leaves only joyful memories and his infectious smile to Lisa Conway of Sudbury, MA and Leslie and Richard Mori of Sammamish, WA; his five grandchildren Jesse, Laura, Savannah, Patrick and Jonathan; his siblings, Richard Conway, Joan Gruchacz, and Grace Chiarella; and many nieces, nephews, extended family and friends.

A Memorial Service will be announced at a later date. Donations to The American Heart Association are being accepted in his memory at www.inmemof.org. Please share your favorite memory of Bill to continue to celebrate the life that he shared with us.