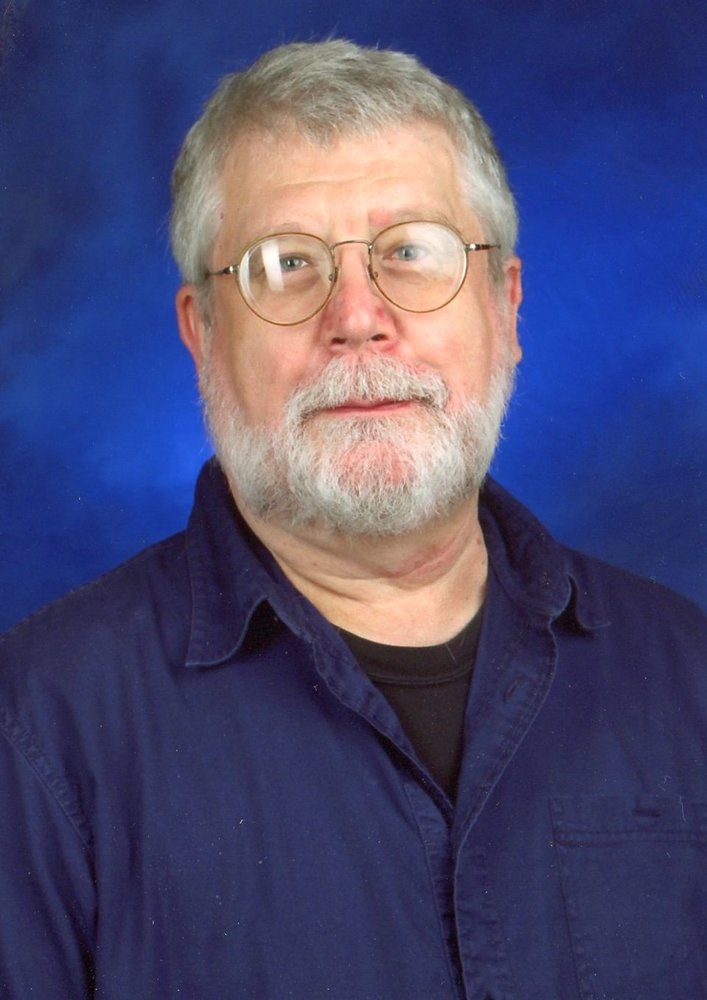 James Sheridan Roberts died on Saturday, January 11, 2020 at St. Clare’s Hospital in Denville, NJ. He suffered a massive heart attack early that morning, and died that afternoon. Jim was drawn to music at an early age, beginning in Colver, Pennsylvania, where he listened to beautiful hymns and piano music in church. The piano was always his first love, and he begged his parents for one after listening to a record of Debussy. He was the only piano student of the only piano teacher in the little coal-mining town. At age 10, the family moved to Dayton, OH, where he started singing with the Dayton Boys Choir. While there, he progressed from a soprano to a bass, and eventually became their accompanist, touring the west coast and Europe. Jim attended Ohio University, graduating in 1973 with a degree in music composition after changing majors a few times, including geology. He worked his way through college playing in rock bands. His band, The Stumps, once opened for Steppenwolf. He was the favorite accompanist for music students, and he won the University Concerto Competition, which allowed him to perform the Ravel Piano Concerto in G major with the OU Symphony Orchestra. While Jim was improvising on piano with the lights off in one of the practice rooms of the OU School of Music, Peg walked down the hall with her viola in hand and knew she needed to meet him. They were married July 4, 1974, in Peg’s childhood home in Mountain Lakes, NJ, right next to the lake. There was great live music performed by friends and relatives; Aunt Gracie’s red velvet cake; a bridal gown and bridesmaid dresses sewn by Peg; and fireworks over the lake! Jim’s first job was in Newark, NJ, where he taught elementary music for a year. From there he went to the Wilson School for three years, during which time he completed his NJ Certification for Public Schools. After teaching at County College of Morris, Bloomfield College, and Kent Place School, he and Peg went out to California Institute of the Arts on music scholarships. Following CalArts, Jim’s interest in composing and performing electronic music led him to return to the east coast as the product specialist for Fairlight Computer Musical Instruments in New York. Fairlight was based in LA and they arranged for Peg, Jim, and their young son, Jimmy, to go back to California. Jim’s Fairlight connections led him to composing and arranging music for film and television in Hollywood. When their daughter Anna was born in 1985, Jim and his family decided LA was not a place they wanted to bring up children. They decided to move back to NJ, and Jim started writing piano accompaniments for songs at Silver Burdett & Ginn as well as Macmillan/McGraw-Hill. He produced over 2,000 recordings for those companies. In 2000, Michele Yampolsky hired Jim to teach elementary music in Randolph. But, having known Jim from previous years at Fairlight and Silver Burdett, she knew that he would be better suited to teaching music technology in the high school. That subject did not exist in many high schools at the time, and Michele was glad to let Jim design his new classroom however he wanted! He was beloved by his students, who appreciated the effort he made to prepare them to become professionals in the recording industry. Jim retired from Randolph HS in 2015. Students loved him for his eccentricities, tangents, wealth of knowledge, and because they felt like they could ‘escape’ to a different world in his music room. One recent tribute in which David Zyto describes the positive impact that Jim had on him as a teacher includes a funny email that Jim wrote to his music tech class: “Heads up Campers! Just to let you know – tomorrow there will be a quiz on chapter 12 on Music Theory & Practice. Leading tone 7th chords – if you’ve been in class and paid attention, it will be CAKE! … See you tomorrow. Bring a pencil. (An eraser is probably not a bad idea too.) Mr. Roberts” The Roberts have lived in Mount Tabor since 1988. The children loved growing up there, and have many fond memories, many involving music. Jim leaves behind his wife Margaret (Peg) Zufall Roberts, his son James William Roberts, and daughter Anna Kathryn Macleod, as well as grandson James Colin Roberts, and granddaughters Sofia Roberts, and Madeleine Rose Macleod. In lieu of flowers, please support your local public school music programs! There will be a memorial service on February 15th at 11 am at The Presbyterian Church of Morristown Chapel, 57 E Park Pl., Morristown, NJ 07960. Please leave a condolence, light a candle, and share your favorite memory of Jim to continue to celebrate the life he shared with us.