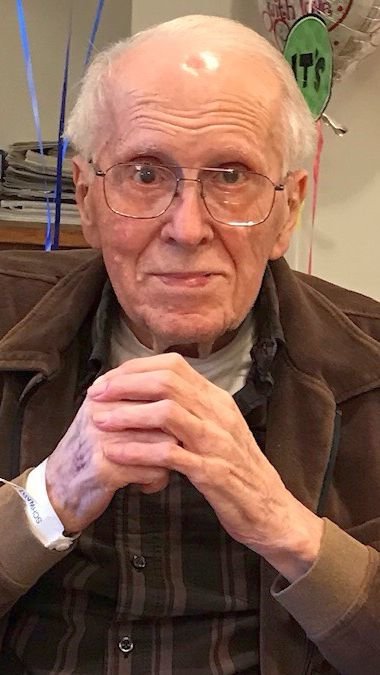 Alfred O. Schwarz passed away peacefully on Friday, January 3, 2020 while in the comfort of his home at Cedar Crest Retirement Community in Pompton Plains. He shared 97 years of generosity, love, and humbleness with his family and friends.

Born in Schwann, Germany to the late Andreas and Luise Marie Schwarz, Alfred was one of two children, who at the age of 4, with his family, relocated to the United States, settling in Morristown, NJ, thereafter moving to Morris Plains, NJ. After graduating from High School, he successfully acquired a position at Bell Telephone Company in Whippany. After 3 years of employment working in the Mechanical Engineering department, Alfred was inducted into the United States Navy in October of 1943 in which he spent the remainder of World War II. Taking advantage of his engineering background, he was assigned to work with Armed Forces Radio, while stationed in the Admiralty Islands in the South Pacific. When he was Honorably Discharged in 1946, he picked up right where he left off in life. He still had his career at Bell Labs and continued to pursue furthering his education as well. Due to Alfred’s consistent hard work and dedication, he was able to graduate from Lehigh University with Honors in 1949 with both a Bachelor’s Degree in Mechanical Engineering and a Master’s Degree in Electrical Engineering. He accomplished all of this to support his family, while furthering his relationship with the love of his life, Irene Raabe. On July 8, 1950 they were married and for 59 years Alfred and his “Dear Irene” shared a wonderful life until Irene passed in 2009; we take comfort in knowing they are now reunited. Alfred had a diverse and enriched 40+ year career at Bell Labs; he had many highlights during his tenure, most notably beginning in 1961 when he was traveling to Maine and France as a member of the team of “The Telestar Earth Stations” which launched the first Telstar communications satellite in July of 1962. Alfred officially retired in 1987.

We can all take a lesson from Alfred who truly made the most of his life and took advantage of a great deal this world has to offer. His many hobbies and interests included photography, lapidary, and orchids. He was a member of the American Orchid Society and Gemological Society of Morristown. He also took a special interest in Amateur or HAM radio and was a member of the Whippany Amateur Radio Club. His main passion was woodturning; he was a member of multiple woodturning organizations both nationally and locally. Alfred was an exceptional man and will be missed by many that knew him along his life journey!

He leaves joyful memories to his sister, Gertrude Palmieri of Croton-On-Hudson, NY; his nephews, Steven Palmieri of Cortlandt Manor, NY, and Charles Palmieri and his wife Kim of Hopewell Junction, NY; his niece, Diane Raabe of Mahwah, NJ; his caring cousins, Anna-Luise Weller, Vera Mayer, Bernd Mayer, and Armin Weller all of Schwann, Germany; and many other dear friends. A special thank you to Petra Auerbach and Ingrid Raschdorf for always being there, supporting, and loving our dear “Onkle Alfred”.

Memorial Service will take place on Saturday, July 18th at 12 pm in the chapel at Our Lady of the Magnificat Parish, 2 Miller Rd, Kinnelon, NJ 07405. Inurnment will follow at Our Lady of the Magnificat Cemetery. Memorial Donations are being accepted in Alfred’s memory to the American Heart Association, www.heart.org, or the charity of your choice. Please leave a condolence, light a candle, and share your favorite memory of Alfred here for his family to cherish.

Share Your Memory of
Alfred
Upload Your Memory View All Memories
Be the first to upload a memory!