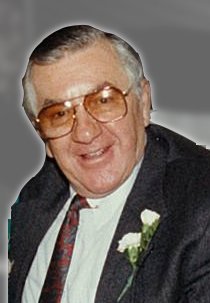 Frederick Ernest “Fred” Gerken, Jr., 94, of Solomons, MD and formerly of Denville, NJ, passed away on December 31, 2019 at Solomons Nursing Center. Born December 6, 1925 in Forest Hills, Long Island, New York, he was the son of the late Frederick Ernest Gerken, Sr. and Lillian (Fitzsimons) Gerken. Fred graduated from Mt. Lakes High School in 1943. He married Gertrude (Hogan) Gerken on May 31, 1947 in St. Mary’s Church in Denville, NJ and was a loving, devoted husband for seventy two years. Fred served in the U.S. Army in WWII from March 16, 1944 until April 30, 1946 . He was a Private 1st Class serving as a Tec 4 and Cannoneer with the 398th Regiment Infantry. During his service he received two Bronze Stars and a Victory Medal. Fred was the Owner/Operator of a Shell Service Station in Boonton, NJ for over twenty five years. He and Gert moved to Calvert County from Denville, NJ in July 2018 to be closer to family. Fred is survived by his wife Gertrude Gerken; his sister, Charlotte M. Smay of GA; nieces and nephews, Sharon Shirey /(Bill) of VA, Robert A. Granzen, Jr. and family of MD, Christine Patton and family of (MD), John Granzen and family of (IA), Barbara Fallin and family of (MD) and Pamela Vahle/ (Tris) of MD. He was preceded in death by his brother, Richard H. Gerken. Family will receive friends on Friday, January 3, 2020 from 9:30 a.m. until 10:00 a.m. with a Mass of Christian Burial celebrated by Father Ken Gill following at 10:00 a.m. at Our Lady Star of the Sea Catholic Church, 90 Alexander Lane, Solomons, MD 20688. Inurnment will be in New Jersey at a later date. Memorial contributions may be made to Calvert Hospice, P.O. Box 838, Prince Frederick, MD 20678 or the Solomons Nursing Center Activities Department, 13325 Dowell Road, P.O. Box 1509, Solomons, MD 20688. Condolences to the family may be made at www.rauschfuneralhomes.com.

Share Your Memory of
Frederick
Upload Your Memory View All Memories
Be the first to upload a memory!