Let’s start with the business itself. Death is, and will always be, a difficult subject. Tough as it may be, people are willing to talk about–and even plan for it–far more today than decades ago. A fairly recent practice is Advance Funeral Planning, where an individual sits down with a funeral director and plans their own services, customized as desired, to lighten the burden on loved ones after they’re gone. Norman Dean can provide traditional visitation and funerals with cemetery burial, or cremation, (which has seen wider religious acceptance of late), memorial services, obituaries, transportation and 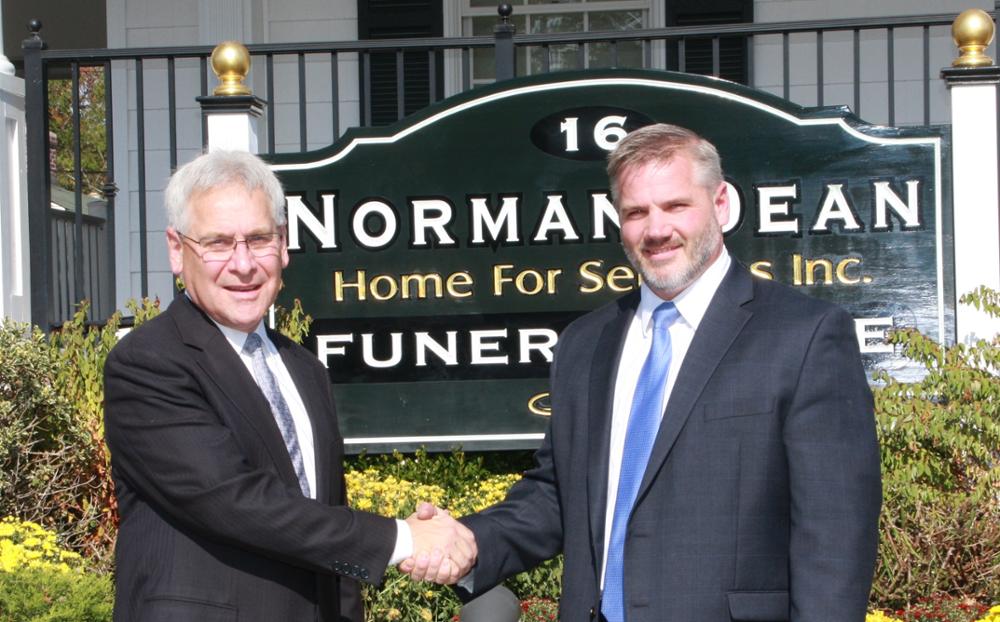 most anything for the ease of the family. When attending to individual requests, the staff has handled everything from hay bales, to Jets-green hearses, private viewing rooms and even parking a Harley Davidson motorcycle in the viewing room.

Funerals are unique culturally, geographically and spiritually, and the modern age has ushered in the technology age, even here. Individuals now rely on the Internet as a leading resource for information and communication in nearly all situations. In response, Norman Dean offers a website showcasing services and products, allowing consumers the freedom to conduct research in the privacy of their own homes. While a written obituary is standard fare, the website also provides condolences guest book, which remains online indefinitely, for sharing wishes, photographs and thoughts with those near and far. Additionally, the building’s beautiful interior is accented by tasteful décor, artwork, and hi-tech mirrors in key locations, which do double duty as video monitors to play slideshows and videos that the family may want to share with those in attendance.

With great pride in his building and operation, it is still the PEOPLE at Norman Dean that Tom attributes his success to throughout the years. Grieving is a personal and emotional experience, and the Dean’s philosophy is that SERVICE and attending to people’s needs individually is critical–emotionally, physically and spiritually. His father Norman opened not a ‘funeral home” but a “home for services” because he believed that’s what people needed—a home and family to accompany people through a difficult time, while being educated about honoring someone’s memory. The family philosophy holds true today as much as it did on the day they opened, and all the staff must be of similar mind to work there. When trust is of paramount importance, Tom Dean understands the value of being local, being connected, and knowing, and being known in the community. Tom joined the family business in 1978, assisting his father Norman. He was raised in Denville, married and raised three children there, and is a well-known man about town, participating in numerous civic groups, business councils, Little League teams and the town gathering for the National Day of Prayer. Tom believes that treating all people with dignity and respect is foundational as an individual and funeral director. He has a passion for what he does–a good thing, as Funeral Directors keep long hours with irregular schedules, and few breaks or vacations. (In truth, most people who work in the field are born into it, a new generation raised with respect for the dearly departed, and regard for the details of funeral science). Even so–after 30 years, it would be customary for Tom Dean to now bring the next generation of Deans onboard; however, while his daughter Courtney works in the office, the other Dean children chose other aspirations to pursue. The legacy needed to be preserved, but how?

Enter: David Milne, a natural for the transition. David started his funeral career with Norman Dean Home For Services nearly 20 years ago, with his apprenticeship, and has continued on to become a fully licensed funeral director and veteran team member. Originally from Media, PA, Dave lives in Indian Lake with his wife Tracy and their two daughters, is a member of Kiwanis and the Indian Lake Community Club, and enjoys coaching soccer and boating. Because he lives and works in Denville, Dave–like Tom–is also personally connected to the community he serves. As a Funeral Director, service is his passion, and Dave goes the extra mile to comfort and assist people as a natural mentor and leader. “There is a lot of educating that goes on when planning a funeral. Navigating the unknown is what makes people fearful; listening to people’s stories, and implementing the small details, tells them that we get it. We are listening, and we’re also helping them see what choices they can make.” Tom relies on Dave to continue to bring fresh perspectives and ideas to the operation, along with managing the clients and staff. After two decades of loyal service, he has been named Partner and Manager, and will continue guiding families in time of need, and growing the business.

Along with David, there are two other Funeral Directors on staff: Rebecca Romanowsky and KrystalAnn Cherico. Each brings her own special skills and energy to Norman Dean, where they both consider what they do a joy and a calling. “There are another nine employees who offer daily support and maintenance, without whom we could not do what we do so well,” said Tom Dean. He considers himself blessed to have found such a devoted team that he can trust implicitly, with his business and his clients. With similar passions for helping people, and the long hours they spend together–weaving together a service, a photo board, arranging flowers, clergy, music; meeting people, pastors, and musicians; coordinating churches, finalizing paperwork and serving clients–they have become a family. This fab four is the now and future face of Norman Dean’s Home for Services–please say hello!