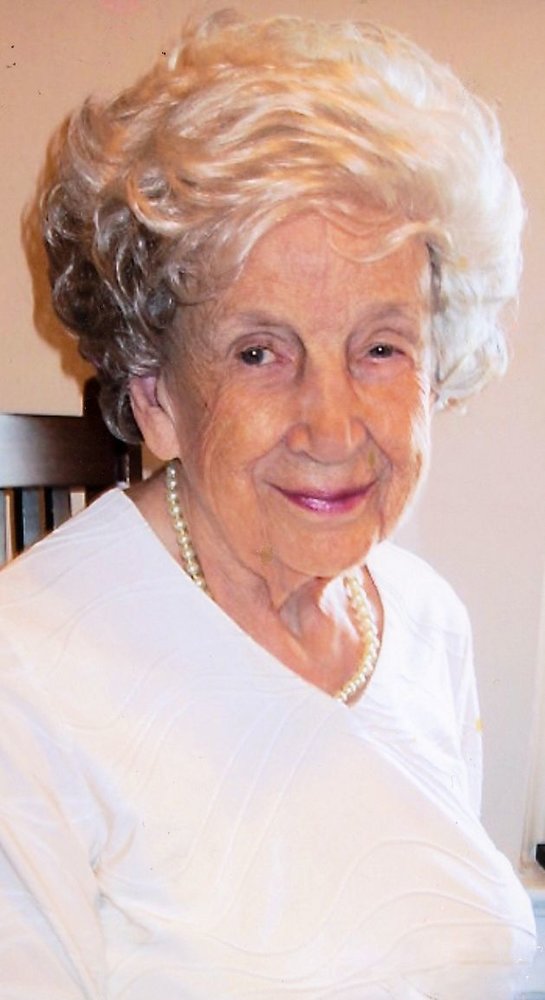 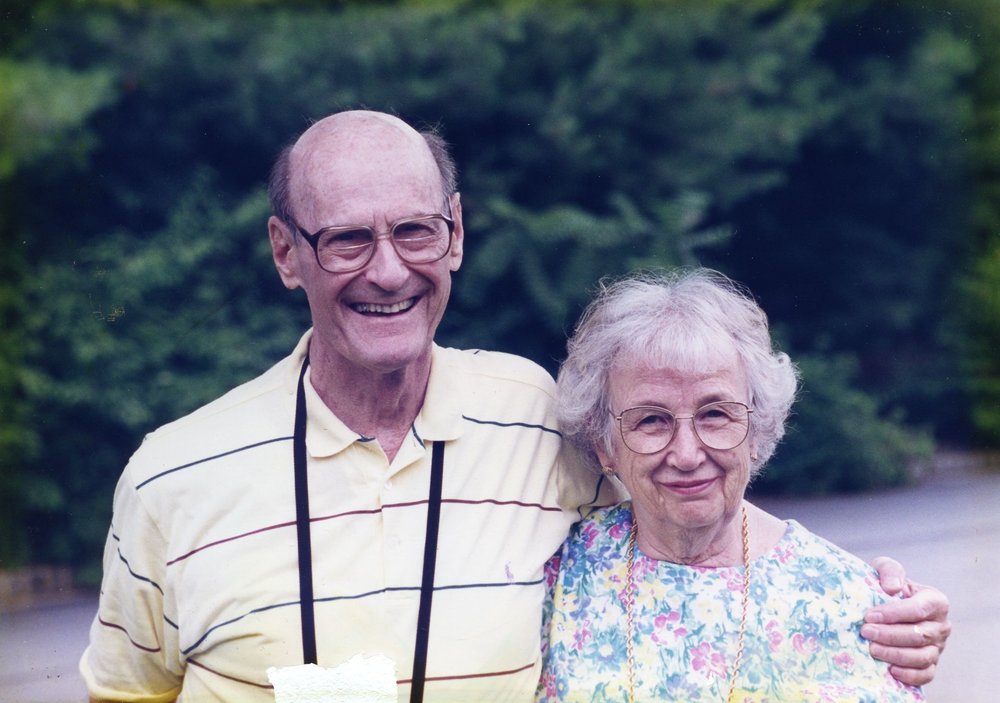 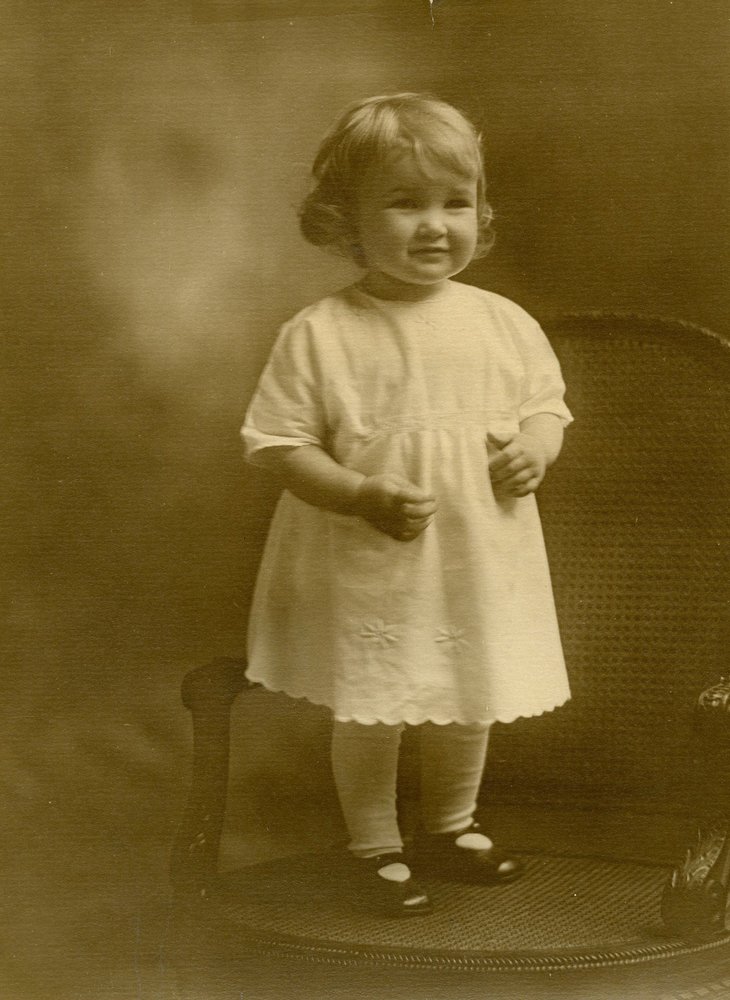 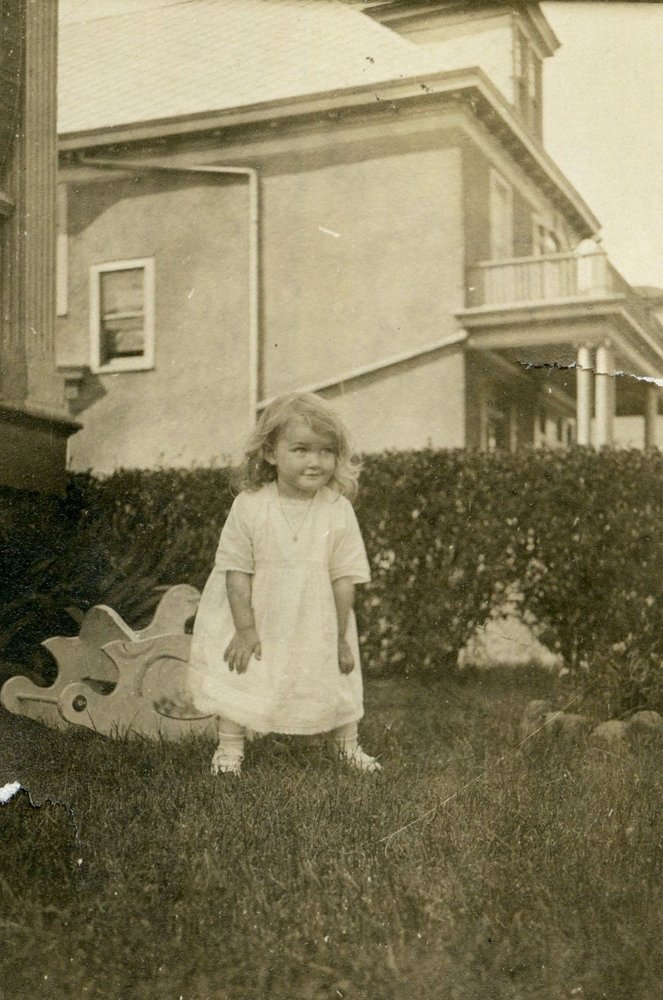 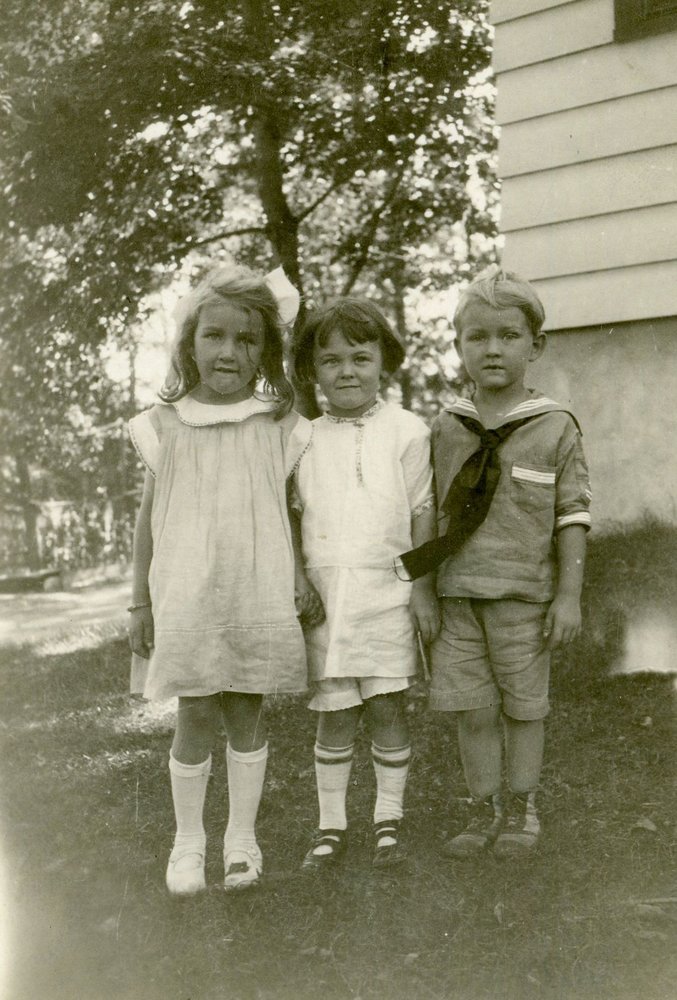 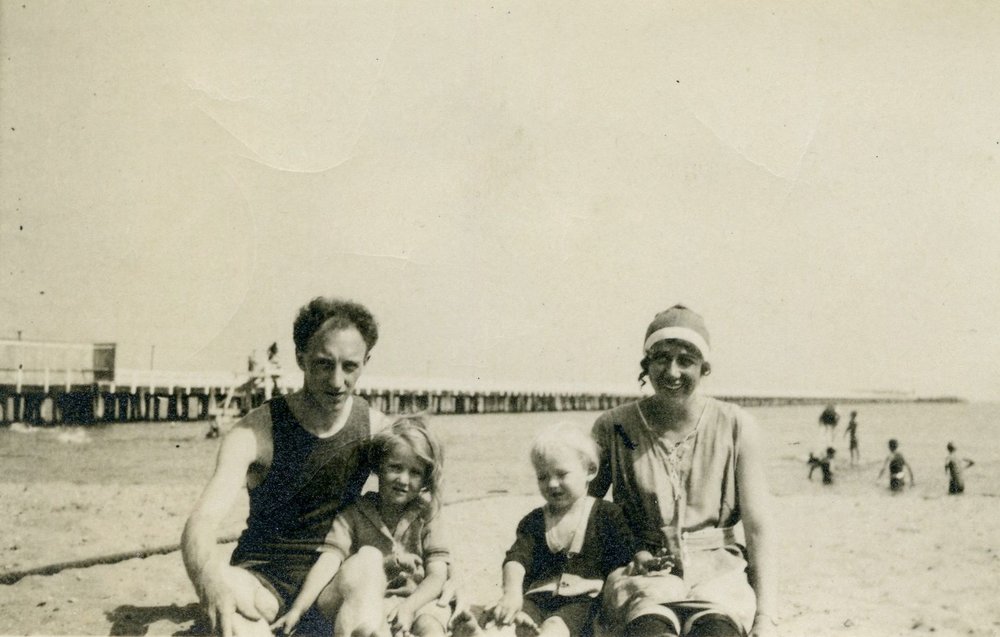 **At the families request, please do not send flowers. Donations can be made in honor of Margaret Mendell to “Reading Is Fundamental” or St. David’s Episcopal Church of Kinnelon, Outreach Programs, by way of www.inmemoryof-memorial.org.**

MARGARET JANE WILSON MENDELL (known as Peg/Peggy) died peacefully on December 19, 2017 at the age of 100 at Abbey Healthcare Center in Delray Beach, Florida. Her husband of 70 years, André Jules Mendell, predeceased her in March 2010 at the age of 92.

Peg was born in Newark, New Jersey on June 20, 1917 to Harry and Sue Wilson, childhood sweethearts; born and educated in England. They had weathered a war, family deaths, long separations, financial challenges, and immigration barriers before finally marrying in the United States in August 1916.  Peg was born the following June; named after the favorite sister of her mother (Margaret) and her father’s beloved mother (Jane). Just over two years later, her brother Harry was born, nicknamed Buddy/Buster.  From the beginning Peg and Buster became inseparable even after the arrival of two more children.

In 1926, her parents purchased a home in Mountain Lakes, New Jersey where she and her brother attended the local elementary school.  In the spring of 1931, Peg graduated from eighth grade as class valedictorian. Her graduation gift request was to spend a summer vacation with her brother Buster, together with their father, friends and cousins in Mountain Lakes. Her younger sisters Pat (age 7) and Cis (age 5) spent the summer with their mother in England with their family relatives.  According to Peg it was one of the “happiest summers of her life.”

Unfortunately, her happiness was short-lived.  Two weeks into the start of the new school year Buster suddenly became gravely ill with what appeared to be rheumatic fever. In the absence of antibiotics such as penicillin (1942) Buster died. For Peg, this was a loss that she says changed her life forever.

Following the death of her brother, her parents decided to enroll Peg as a day student at The Kent Place School for girls in Summit New Jersey. It was the following year that she started and remained a boarding student until graduating in 1935.  Believing that all their children should receive a college education, Peg applied to and was accepted to Radcliffe College (the sister College of Harvard University) in Cambridge, Massachusetts, graduating in May 1939 with honors with a BA in political science. But it was not until 1960 that Peg would receive her Harvard University diploma after the trustees of Harvard incorporated their separate but “equal” women’s college Radcliffe into one institution, fulfilling the promise that the Radcliffe founders made 120 years ago to give women a Harvard education with all its advantages.

Unable to find work in 1939 without secretarial skills, Peg was obligated to attend secretarial school.  She was subsequently hired as a research assistant by Wright Aeronautical Corporation, one of the largest manufacturers of aircraft engines during the Second World War, with plants in Paterson and Manhattan. The Wright engines powered all of the B-17 Flying Fortresses utilized during the War, along with the B-25 bombers that participated in the Doolittle raid on Tokyo in 1942 and Enola Gay, the B-29 Super fortress that dropped the atomic bomb on Hiroshima on August 6, 1945.

It was during her first three weeks at Harvard-Radcliffe that Peg met her husband André Mendell, introduced by her cousin, Bill Wilson. Due to the pending war, Peg and André married secretly in October 1939 and formally in August 1940. That year, André was commissioned as a lieutenant commander in the US Navy and sent to war (active duty for 5 years). Peg, like many Navy wives, had left her fulltime employment in order to be with her husband; moving numerous times by herself as Andre was relocated to Virginia, then to Key West, to Panama, and back again to Florida.  When she became pregnant with their first child in 1943, Peg moved back to her parent’s home in New Jersey, giving birth (without Andre) to their first child Andy in March 1944. Upon his return from active Naval service the couple, now expecting their second child John, purchased their first home in Long Island. Wanting to be closer to her family Peg and Andre with the help of their parents in 1948 one of the first homes (the third residence) in a new community called Smoke Rise, located in Kinnelon, New Jersey.  They resided there for almost 50 years raising their four children; Andy, John, Patty and Rich.

As early residents of Smoke Rise Peg and André loved attending Sunday services by rowboat at   St. Hubert’s Chapel located on Lake Kinnelon; later helping to start the first Smoke Rise Community Church. It was not uncommon to have the Mendell family join other families hiking up Kitty Ann Mountain (now Mountain Road) to the Smoke Rise Tower and climbing to the top as well as participating in community picnics on Long Meadow and at the Village Inn. In the early days of Smoke Rise Peg and other women organized skating events on Lake Kinnelon and later Hoot Owl Pond.  In addition Peg helped to create the first and only lending library located at the Smoke Rise Inn, and organized the first children’s nursery school and children’s beach summer programs.

Over the years Peg (and Andre) became involved in many volunteer organizations throughout Kinnelon and northern New Jersey. In the late  1950s the couple, with several other interested families, helped to start the first Episcopal church in Kinnelon, St. David’s; raising funds to purchase the  property and build the church May 1961 and holing the first service at the new church  on March 13, 1963. Both Peg and André remained active members of St. David’s until they moved from Smoke Rise in 1986.  André served as a head lay reader, educating and training both altar boys and apprentice lay readers, While Peg served on the altar guild, both for a term as the Altar Guild President and as part of their special group of skilled needle pointers, designing and sewing the altar linens used at St. David’s.

In addition to her church work, Peg was a longtime member and president of the League of Women Voters of northern New Jersey.  Her determination to have public education be accessible to all was instrumental in helping to expand the educational facilities and services of Kinnelon public schools.  It was her strong belief that good public education should be available to everyone regardless of race gender or religion.  Her belief caused her to seek and win a seat on the Kinnelon Board of Education (BOE), where she served from 1967-1971.  She on behalf of her minority board members brought a successful lawsuit against the BOE for denying them equal access to financial records and background information on applicants for teaching, principal and superintendent positions.  The legal decisions supported the plaintiffs’ position that the BOE was more interested in reducing costs and less interested in maintaining quality educational services for students at the Kinnelon Public Schools.

Even after retiring to Delray Beach Florida the couple remained active in the local Episcopal Church St. Paul’s.  Peg volunteered for a number of years tutoring immigrants in English. It wasn’t until she found her sight so diminished by her macular degeneration and her mind becoming too forgetful that she stopped tutoring.

Peg, the oldest of 6 siblings, is survived by her sister Cicely and twin brothers, Richard and John (also known as Dick and Jack).  She is also survived by her four children: André (Andy) and wife Phyllis, John and his wife Linda, Patricia (Patty/Pat) and her husband Richard and Richard (Rich) and his wife Sara, as well as her 12 grandchildren and 9 great-grandchildren.

Services for Peg are to be held on Friday May 11 at 10:30 at St. David’s Episcopal Church, 91 Kinnelon Road, in Kinnelon.  Immediately following will be a brief prayer service at the Rockaway Valley Cemetery in Boonton Twp. and a 1:00 pm reception celebration at the Smoke Rise Inn, in Kinnelon, New Jersey.   For more information or to confirm that you will be coming to the service and/or luncheon, please contact Patricia at patriciamendell@gmail.com.  Donations can be made in honor of Margaret Mendell to “Reading Is Fundamental” or St. David’s Episcopal Church of Kinnelon, Outreach Programs, by way of www.inmemoryof-memorial.org.

Please leave a condolence and special memory for her family.

**At the families request, please do not send flowers. Donations can be made in honor of Margaret Mendell to “Reading Is Fundamental” or St. David’s Episcopal Church of Kinnelon, Outreach Programs, by way of www.inmemoryof-memorial.org.**