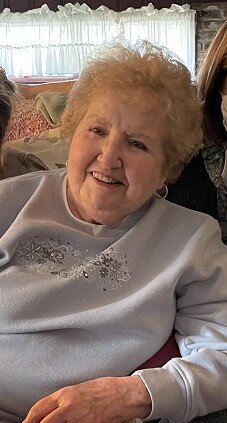 Please share a memory of Patricia to include in a keepsake book for family and friends.
View Tribute Book

Patricia “Pat” W. Schmidt, loving mother, grandmother, great grandmother, and friend to many, passed away peacefully on January 18, 2023, at the age of 87.

Pat was born in Passaic, NJ. She was raised in Lincoln Park, NJ where she was an athletic and adventurous youngster. Later, she attended Boonton High School. After graduation, she worked for Reaction Motors in Denville. This is where she met Bob in 1955. They fell in love and were married in September of 1958 at Denville Community Church. While Bob attended Upsala College, Pat earned her PHT, or “Pushed Hubby Through” degree. During this time, she was a devoted and supportive wife.

Pat and Bob would move to White Meadow Lake in Rockaway Township in 1959. Here, they would raise a family and reside for almost 63 years. Pat was dedicated to Bob and being the best mother to her three children. In her spare time, she enjoyed sewing and making crafts and cherished spending time with her family.

In addition to being actively involved with her children’s many extracurricular activities, Pat was always there to help others any way she could. She often volunteered her time to her church both as a UMW member, and serving as the Treasurer on the Board of Trustees for 12 years. She was involved with other causes like the Salvation Army, where she was a regular bell ringer during the holidays. Also, Pat would provide meal deliveries to those in need or bring gift baskets to hospitals either through the church outreach or through other charitable programs. She was a PTA President, a Brownie leader for the Girl Scouts, an elementary school aid, as well as a Morris Hills High School Band Booster. Until recently, Pat looked forward to meeting up with her high school friends, the “Lunch Bunch”, every month. Here, they would enjoy a meal and discuss what was going on in each other’s lives.

In addition to working at Reaction Motors, Pat had other jobs over the years. From being a hostess at a fine dining establishment to insurance. Her most recent position, from which she retired, was as Payroll Tax Coordinator with BASF Corp. in Mount Olive, NJ. In her retirement, Pat enjoyed adventurous trips to the Canadian Rockies, Mackinac Island, California, and Hawaii. Pat and Bob were regulars at the West Mountain Inn in Vermont and wouldn’t miss a Dickens Weekend in Wellsboro, PA. They truly enjoyed their long, relaxing summers at their house in Maine and were able to share their experiences with their family and friends. Most importantly to her, Pat would not miss any of her grandchildren’s events often traveling far and wide to support her family.

Pat’s memory will live on through her loving children: Susan (Art) Mathious, Jennifer Chuss, and Robert (Kerry) Schmidt, Jr. Her grandchildren: Max and Brian Mathious, Nicolette (Charlie) Minnigerode and Kendra Chuss, and Evan and Kayleigh Schmidt. Her sweet great grandchildren: Aubree, Brayliegh, Briley, and Weston. Pat is also survived by her sister, the Rev. Joanne Whitehead, along with many loving nieces and nephews. In addition to her sweetheart Bob, she is predeceased by her sister, Carolyn Whitehead.

A public visitation for Patricia is scheduled for Sunday, January 22nd, from 1 to 5PM at Norman Dean Home for Services, 16 Righter Avenue, Denville, New Jersey 07834. A Funeral Service is scheduled for the following day, Monday, January 23rd, at 10AM at Denville Community United Methodist Church, 190 Diamond Spring Road Denville, NJ. Interment will follow at Restland Memorial Park, East Hanover, NJ. In lieu of flowers, the family asks that memorial donations in Pat’s name be made to: Denville Community United Methodist Church. Please leave a condolence, light a candle, or share your favorite memory of Patricia here for her family to cherish forever.