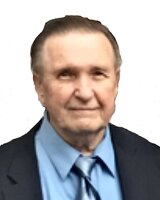 Born to Frank and Sophia (Tama) Kot, he was one of 16 children born in the coal mining town of Johnstown, PA.

Joseph proudly served in the United States Army from 1957 to 1960 in the 3d Battalion, 80th Artillery, where he was stationed in Germany from 1958 until he was Honorably Discharged. He then moved to New Jersey, settling in Garfield before moving to Lake Hiawatha where he raised his family and then retired to Milford, DE where he lived for 15 years before moving to Hamilton Square, NJ last year.

He worked for many years as a union Electrician at ADT Security in Clifton, NJ and owned a successful flower shop before retiring in 2006.  He loved animals, wildlife, and nature. One of his favorite things was taking Sunday drives into scenic beauty, whether it was the mountains or farmland. He also enjoyed taking family hikes to the Delaware Water Gap on the weekends or anywhere else if the backdrop was scenic. Joseph was also very handy, he loved to fix and remodel things, and took great pride in working in his yard or around the house. Another passion he had was going to a good Polish festival or Octoberfest or checking out the Military Airshows. Above all else he loved to spend time with his family and 10 grandchildren.