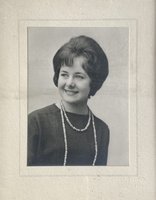 Sheila Madeline (née Tittensor) Cowé of Denville, New Jersey passed away peacefully at Saint Clare’s Hospital on April 30, 2021. She shared 79 years of love and devotion with her family and friends.

Sheila was born in London, England, studied nursing, and worked at the Falkirk Royal Infirmary in Scotland. As a young woman, she went on holiday to the Isle of Arran in the village of Lamlash. While on vacation, she met the love of her life, Alan, when he asked her to dance. They fell in love and were married on a beautiful day in May 1963, surrounded by family, in Scotland. They welcomed their first son Andrew Barnett and then emigrated to Montreal, Canada in 1967, before settling in Denville in 1969. Here, they had their second son, Colin Sinclair.

Sheila was a loving wife and devoted mother. She and Alan were always together and always having fun. They bought a ranch-style home on the Rockaway River, and transformed a plain plot of land into an oasis of flourishing gardens. At home, Sheila could most often be found tending to her beautiful yard and gardens. Her flowers were always in bloom and with Alan’s support and keen eye, they designed exceptional landscapes. Her passion for gardening, wildlife, knitting and crafts filled her home inside and out.

She raised two sons and was always rescuing canine friends, from her collie Donna, to corgis Ivanhoe, Lancelot, Kaylee, Boots and Ponto, chihuahua Bambi, Scottish terrier Benson, and two West Highland terriers, Frosty and Gunner (in order of appearance). Above all, Sheila loved spending time with her 3 grandchildren, Lauren, Gillian, and Gavin. The sun rose and set on her family, and she was so very proud of them.

Sheila enjoyed dancing, and in her younger years, sang in choirs throughout Europe. She enjoyed musicals in New York City, classical movies, and her grand-daughters’ dance performances. In her later years, she spent many joyful times with her grandson Gavin. She took him to piano lessons, helped him with homework, and loved watching him on the soccer field. Shiela was a creative thinker and made anything she touched look beautiful. She had a keen sense of style, unmistakable wit, and a heart of pure gold.

Sheila will be lovingly remembered by her two sons, Andrew and Colin, their wives, Peg and Michele, her sister Anne Frost and sister-in-law Florence Cowe. She is also survived by her three grandchildren whom she adored, Lauren, Gillian and Gavin, and many nieces and nephews.

Sheila and Alan were soulmates and with his passing this past Valentine's day, came a broken heart. With heavy hearts, we take comfort in knowing they are united again, watching over their family with love. We are planning to celebrate the lives of Sheila and Alan early summer, with further details to follow.