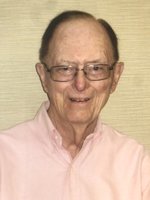 …I loved you so…‘twas Heaven here with you.

Douglas Campbell passed away peacefully on Good Friday, April 2, 2021, following a brief illness.  He shared 86 years of love and faith with his family.  A Memorial will be held at a later date when it is safe to gather and celebrate his life. Donations in his memory may be made to the American Heart Association.  Please leave your memories here.  His family will cherish them.

Doug was born in Columbus, Georgia in 1934 and was the only child of Douglas & Elizabeth (nee Barnett) Campbell. His father was a Captain in the U.S. Army, stationed in Schofield Barracks, HI.  Sadly in 1939, his father died and Doug and his mother moved to NJ to be closer to family.

He was raised in Newark and after high school attended Rutgers University, graduating with an MBA in finance. Soon after, he joined the U.S. Army, proudly serving our country and achieving the rank of Liutenant.  Upon his honorable discharge, he returned to his education, becoming a Professional Engineer.

In 1963, Doug met the love of his life, Rose Mullen.  They were married in 1964 and soon settled in Parsippany to start a family of their own.   He worked with PS&G for 35 years, retiring as Director of Mechanical Engineering & Chemical Engineering in 1992.  In 1995, they moved to Mountain Lakes and in 2019 settled into The Oaks in Denville, NJ, where they enjoyed new activities and relationships.  They recently celebrated 56 years of marriage.

The Campbells were long time parishioners of St. Ann’s in Parsippany and most recently St. Catherine of Sienna.

Doug was an avid golfer and a longtime member of Mount Tabor Country Club and Picatinny Golf Club.  He enjoyedtraveling, was an avid bridge player and a fan of the New York Yankees and New York Giants. He had a quick wit and was loved by all who knew him.  Above all, Doug loved his family.  He was a loving husband, proud father and adoring Grandpa, which may have been his greatest title.  He was the biggest cheerleader to his four grandchildren through the years.